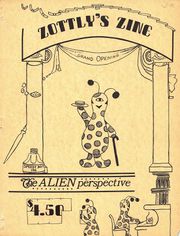 Zottly's Zine is a 70-page gen multimedia anthology. It has the subtitle "The Alien Perspective." It was sold as "the zine with the alien perspective: Klingons, Wookies [sic] Wyverns, Droligs all get a chance to tell their side."

This zine bills itself as one presenting "The Alien Perspective," something many of INTERSTAT'S reader's among others, feel is seriously lacking in the bulk of Trek and Wars zines. For the most part, the zine lives up to its PR. From a technical standpoint the zine is well printed, quite readable even though reduced, and is nicely put together from a layout standpoint and in terms of flow from one piece to the next. There are very few typos and the zine contains very distinctive, original art, which is also well reproduced. In terms of content, there is a wide range of material from Trek to Wars to original science fiction - both the poetic and story form are represented. There is also a review article, cartoons, puzzles, and an art portfolio. Each written selection is accompanied by artwork. The stories in the zine are a diverse group.

The weakest of them, especially in terms of maintaining the "alien perspective" is "The Log," by Jonathan Drexler, which is a report by an apparently humanoid exploration crew about a planet populated by non-humanoids. The piece is _well-written, but it is simply an imaginative foray - the creation of another world. As a writer, I found it a waste to go to the trouble of creating an interesting world, populating it, and then not using it in a story. As a reader, I was left wondering what the purpose of the piece was other than to suggest the author has an inventive mind and is capable of translating her thoughts into clear images; the piece needs a context.

Another of the non-media pieces (which predominate, by the way) is a science fiction story "Wyvern Child," by Nancy Janda. It is about dragon-like creatures and humanoids (there is a Pern flavor) but it is a highly imaginative story in its own right. There are a few interesting plot twists but the story needs work because the reader is not given enough context or background to effectively evaluate certain parts of the story, which is unfortunate. These very points are ones which should be clear because they serve to heighten the emotional impact. Even more empathy for the lead characters could be created if the story were stronger.

The zine's longest piece is a very intriguing science fiction story called "Metis' Cupbearers" by June Grandey (who also does interpretive illos for the story). The author creates a world where humans (Huembies) and non-humans (Drolig) interact, and learn to live with one another in a way that to other Terrans (who eventually arrive and precipitate the story's action) appears to be slavery but which from the native inhabitants perspective is a benign relationship that ultimately allowed the humans to survive under the unusual conditions which exist on the planet's surface. The characters are well crafted and interesting; the author efficiently fleshes them out and provides, for the most part, sufficient but not ovewhelming motivations and histories for the characters. The primary problem with the story is that it is not long enough for the plot resolution the author has written. The story is resolved too quickly and conviently. The central human character - Thirth -who has at one point been soul to soul with the Drolig, manages to "forget" an important bit of information that the author spends several pages telling us he receives. As a reader, I felt as if the author was either tired or pressured and so resolved the story too quickly to match the excellent pace of story telling that characterized the rest of the piece.

The other two stories are media oriented. One is a lovely vignette told by and about Chewbacca who must resolve a conflict between obeying Han's last order/request to care for Leia and the obligation Chewie feels to rescue his companion. Sharon Giacomo's "Interlude" also serves as a vehicle for the creation of another non-human character, one Lynax of Lynasia who helps the Wookie put events and motivations in their proper perspective. The author does an excellent job of making the characters more than just shadows of the humans who dominate the SW universe.

The final story is a Trek story called "The Nastiest Things" by Linda Slusher. It offers the reader a view of Klingons not usually presented in the aired series (or anywhere else for that matter). The Klingons are three-dimensional people in the story - not just the bad guys - although they bring their own brand of mayhem to a diplomatic reception. The story is well written, the characters are distinct, interesting, and well fleshed out even though the story is short. Genie Summers' illos complement the piece very well. The only problem with the story is that its impact and punchline (yes, it is possible to write a humorous, non-tribble story about Klingons) are diluted somewhat by the fact that no one thought to mention that the Klingon characters are part of a larger Klingon universe that Slusher has created (that of the Black Sun). The story stands alone and is cute, but when viewed in the context of her larger universe, it is more ironic and much funnier. As a writer myself, it seems a shame to lose even an ounce of impact when you've gone to the trouble of creating characters, worlds, etc.

The quality of poetry is uneven. Ann Cecil offers two excellent pieces, although her Jawa piece, "A Bystander No Longer Innocent", is better suited to the intense, image-creating language and format she employs. "Seen By Starlight" does, however, create lovely pictures by the effective use of words -"cometary lace" is an excellent example.

Dawn Goto's short poem "1 Rotten Apple" is good, especially if you are a 2001 fan. The remaining poems or short pieces are difficult to evaluate because they are the sort of thing that either grabs you or leaves you cold. The puzzles and cartoons, likewise, either appeal or they don't. The cartoons were good and the puzzles okay except that (and this is totally a personal preference) I would rather have had a poem or short story in their place.

The review article focuses on The Outer Limits and the episode "The Galaxy Being" and is written and illoed (both well done) by Clifford Woodward. Artwork, whether portrait, interpretive, or elaborate border is excellent, with Summers, Grandey, Bryant, Janda, and Woodward performing the illos. Their styles are distinct but well suited to the pieces they accompany. The art portfollio does offer some imaginative creatures and interesting scenes that would make good writing contest illos.

The zine also makes mention of one Zottly, a charming, roly-poly, one-eyed, spotted entity with antennae who looks like he just escaped from a connect-the-dot book. Hopefully, the promised Zottly story will be spotted in issue two. Overall, I would recommend the zine, both for its perspective and the high quality of writing, artistry, and editing. [1]

Zottley's Zine is... unusual. What can one say about a fanzine who's namesake is a bagel? Oops, back to the review. Like the subtitle says. An Alien Perspective, Zottley's is a collection of short stories about aliens. No Kirk, no Spock, just Klingons, Wookies [sic], and a variety of other aliens. The first story, "The Nastiest Things," is my personal favorite in this motley collection.

The subtle humor of a Klingon caught with his pants down ranks as one of my all-time favorites. "Wjrvern-child" puts humanoids into alien shoes and vice versa. Cleverly done, this insightful story is also very thought provoking.

Beautiful artwork and cartoons are in abundance; also puzzles and an Outer Limits review. (I'm not a fair judge of poetry, so I won't comment on the several present.) Zottley's goes smoothly until the last story, "Metis' Cupbearers." Two intensive readings failed to enlighten me about the story's direction. It is slow and difficult going, characterizations are lacking or incomplete, not a lot of questions are left unanswered. Unfortunately, nearly the fanzine is "Metis Cupbearers," Nevertheless, "Nastiest Things" made the entire fanzine worth the money. Zottley's Zine is one of the best fanzines I have ever read; in my top ten. A 9.9 out of 10.

-- NOTE. My only 10 out of 10 is the Kraith series. This review was printed here with the permission of the authors. [2]