The zine was published by Two Vixens Press between 2002 and 2005. The fanzines have elaborate illustrations and photo manips. The copies were hand-assembled, and to forestall complaints about 'imperfections' or errors, the publisher's enclosed a note about "Hand-Jobs." (see gallery below).

The exact order of publication and number of fanzines is not clear. Several have been listed for sale under the following titles. They are listed here in a best-guess order. Many of the stories were part of the The Warrior's Heart (Star Wars TPM series) and were posted online. Reviews and story descriptions can be found here.

The Warrior's Heart - Early Days (with the gold foil across the Fuumin cover in a strategic spot). Comb bound. 101 pages. It was published in 2002. The zine won the TPM Best Zine Sizzler award at ConneXions. The cover won the Sizzler TPM Best Art. Art by Fuumin, Black Rose, Smitty, and Moonshine. 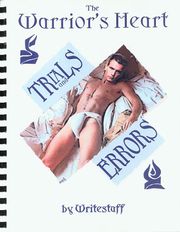 The Warrior's Heart - Trials and Errors has 162 pages. It won the TPM Best Novel at ConneXions Sizzler as well as a Mediawest a 2003 Fan Q Award. Art by Fuumin, EWK, Tem-Ve, Smitty, Writestuff, Moonshine, and Cynthia Martin. It was published in 2002.

The Warrior's Heart - What was Old is New Again has 156 pages. The story "Masquerade" won a Sizzler award for TPM Best Story ("Masquerade") and the story "Master Class won for Best Short Story. Art by Black Rose, Fuumin, MadByrd, and Smitty.

Writestuff also wrote another series set in the Warrior's Heart universe called "The Long Shadows" series. Several chapters in the series have been released in printed fanzine format. All stories are archived online.[2]