The Tribe of Jen-Wae is a gen Star Trek: TOS 92-page novel by Meg Wright. 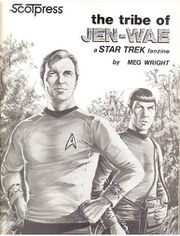 Summary (from the online version): "The natives on a Prime Directive planet carve a statue of one of a landing party... but none of them was closer to the landing party than forty kilometers."

Summary from an ad in Universal Translator: "Ordered back to a prime directive planet for supplies of a drug they found there, the landing party finds the natives worshipping a goddess, the statue of which is the image of one of their crew; yet no native saw the original landing party."

'The Tribe of Jen-wae' is a one story action adventure zine in traditional style by Meg Wright. The plot is effectively constructed; there are no fundamental character flaws and the whole is competently presented in the author's usual smooth style. Why then, I asked myself, when I had finished, was I left feeling oddly unsatisfied and in some difficulty to explain why? In search of the answer, I re-read the story several times. Yes, it is everything I've said but it leaves the reader's emotions untouched. There is little sense of suspense and danger, no fears for the characters' well-being, no sympathy for their dilemma or relief at their safety.

The plot hinges on an accidental violation of the Prime Directive while the crew of the Enterprise is surveying a primitive planet; the subsequent search there for a vital drug-bearing plant and the solution to the Prime Directive problem, which involves the strange characteristics of the tribe. Interesting in itself, yet no one is placed in any real danger. The transporter is used, perhaps too often leaving the reader always conscious of its saving presence and removing the sense of danger. At one stage, Spock becomes separated from Kirk and McCoy and they are anxious. However, the reader is permitted to follow Spock and know he has not been harmed. The suspense is destroyed.

The interesting issue of the prime Directive is raised, together witn Spock's highly unorthodox method of putting right the original mistake, yet the author does not analyse the morality of this in any dept. Likewise, Spock disagrees with Kirk over the Captain's solution to the problem of obtaining the drug but the dispute is not followed up. At the end Spock merely assures Kirk that the tragic events that followed the Captain's decision "could not have been foreseen", which seems to be an easy way out. Kirk's own self-recriminations are brief and unconvincing.

It seems that in 'Tribe of Jen-wae' the author has made a deliberate attempt to avoid emotional entanglements and incidentally any violence. Whilst I dislike gratuitous violence intensely, it seems a pity that, having devised a satisfyingly original end for the villain, the writer does not permit us to watch it, again removing the sense of violent danger on this primitive planet.

Even after writing this review, I am puzzled by 'The Tribe of Jen-wae'. It still reads well as straightforward action adventure but unlike the best episodes of the series it does not combine action with food for thought, and having enjoyed 'As New Wine' by the same author so intensely, perhaps I was expecting too much.

I'd like to mention a good zine I've read recently; THE TRIBE OF JEN-WAE by Meg Wright, published by ScoTpress. If you're , looking for a good action/adventure story with a liberal sprinkling of "relationship" and an interesting plot, I thoroughly recommend this one. The front cover is a cut above the average British zine too. [2]

[this is a response to a 1981 review in Communicator #1]: There are several points in Communicator that I feel I'd like to respond to, both as a writer and as an editor (quite apart from "being a fan). With regard to the review of 'Tribe of Jen-wae' - I feel this was a reasonable review, although, obviously, I feel the writer of it has missed the point of the story slightly. This story has - in my opinion - all' the things that could have sold it as a pro-novel; a story revolving round events on the planet, with the Enterprise crew becoming involved. Their presence did help solve the problem of Dah-vee for the natives - a problem that would have' arisen no matter what else had happened (or not happened). The action followed Spock when he was separated from Kirk and McCoy because it had to? All they could do was sit in the hut and wait for events to be resolved, Spock was where the action was. To have remained with Kirk and McCoy at that point would have made for pretty dull reading then a lengthy explanation from Spock regarding events. Granted there was not as much overt character inter-relationship as there was in 'As New Wine' (and far far less than in 'With Hoops of Steel' also by Meg Wright) but there was a fair amount of subtle interaction. [3]

Mammalian Hermaphrodites! I do realise the federation had reached far out, and it's possible they exist but we take too long to find this out. The story is quite simple, routine missions and new planet with new plant life; big trouble with Jen-Wae for plant life. Familiar theme with routine style of rescue. Characters well drawn artwork well executed for this story. Pity I think it should have had a little more oomph!! [4]