The Reluctant Fan is a parody of a con report. It was written by Terrence Oswald Knova. 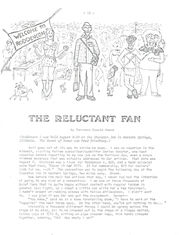 The fictitious con was a Star Trek con held August 8-10, 1975 at the Sheraton Inn in Western Springs, Illinois. The Guest of Honor was Fred Friedberg.

The title is a pun on "Roddenberry" and the fanwork's last line, uttered through a stuffy nose due to a cold: "Id cerdainly wuz a rodden con!"

The parody was published in The Clipper Trade Ship #8.

An Afterward: Letter to the Editor of The Clipper Trade Ship

Dear Jim: You now hold within your grasp the Roddoncon Report. After you read the ending, you'll see why I should have taped it to you, claiming two broken arms.

Of course, this entire thing is generally fictitious. If you use it, you might warn your readers somewhere. Only you and I need know that it comes as a conglomeration of experiences you, Mike, Gayle and I have had from all the cons we've been to, although somewhat exaggerated. I've tried to keep it as short as possible but... Printability: there may be a few problems. There ARE a few problems. Most of the names in this satire are real. Should I change them or leave them in for credibility? Do you think the people will mind? Or sue? Also, using myself as the central character; do you think people would think me too egotistical?

If your readers don't stop subscribing after reading this, how do you think they'd react to a Kraith story? I've got this idea, heh heh heh...

This con report is by a fan who wrote articles for The Clipper Trade Ship -- [I got to the hotel] at 6 AM, hoping to get at the front of the registration desk for when it opened at 9:00. Unfortunately, about one thousand people had the same original idea ahead of me. I had no problem getting a good seat at the opening address at 10:00 in the Vargas Room. That's because I wasn't there; it wasn't until noon did I finally find myself directly in front of the registration table where two rusty typewriters were grinding out name tags. Marvelous. First they hand you a 3x5 card, asking for your name, address, next of kin, then ignore it while you verbally tell them your name, city, and state. "Terrence Knova, Paramount, California," I sighed to the girl. Her eyebrows lifted at "Paramount" - the left one quizzically, the right one skeptically, I nodded reassuringly. It's the truth. The city was there long before the picture company formed in Hollywood, Of course she typed my name N-O-V-A, instead of K-N-O-V-A; ruined her day to have to retype it.

Officially registered as #2277 and indoctrinated with a program booklet that had been pre-autographed by David Gerrold, I quickly consulted the listings to see what was scheduled for 12:30 Friday, Nothing. So I decided to see the exhibits and the Hucksters' Room.

Before leaving the hotel lobby and resisting the urge to get as far away as possible from these human stockyards (taking the train to Chicago sounded nice), I spied a little booth with a small line. The sign atop said "Banquet tickets sold here." Why not?, I asked. Before I could answer, it was my turn to be served, "Um, how does a banquet work?" "You sit at tables with the guests - one guest per table. Most tables are sold out by now; just a few tickets and choice of guests left. Only $10." "Okay, here." "Who would you like to sit with? Craig Hundley or--Oh! That's all there is left," "Who's Craig Hundley? "He played Tommy in "And the Children Shall Lead." Looking at my Banquet ticket, I wondered if I could eat it instead. But the Banquet wasn't until Sunday afternoon.

All convention facilities were on the second floor. Spacious, too. Thank God it could handle the 2300 and growing number of Trekkers, Trekkies, Treksters, Trekfen, Trekkiepoos, and journalist.... Did I say spacious? Well, everything except the Hucksters' Room. Wall-to-wall people scrambling to buy photos, books, you name it. Sardines in search of the key that would open the tin to happiness. Whatever. Security was tight. After being relieved of camera bag and tape recorder, then frisked, I was allowed entrance to the free-for-all.

Turning to the rest of the hucksters, I quickly found out that Star Trek film clips were forbidden at this con by Paramount Studios. From dealer to dealer, the same tale: sorry, no film clips... At that moment I spied one dealer making a transaction beneath the table (underhanded of him, you might say). A few slides were being sold on the sly, my eagle eyes told me. So I nonchalantly strolled up and casually asked: if he indeed nave any Star Trek slides for sale — under the counter. "Why, of course — " he began, beaming, oscillating his eyebrows, "— we have — ooo — " His voice and manner abruptly changed as his eyes, flickering to my name badge, focused on "Paramount." "- no slides for sale. They aren't licensed." Beads of perspiration gleamed on his forehead...

... I had time enough when the film was over to see the Art Show before it closed. Once again I was relieved of my paraphernalia by terse security men, before allowed to roam freely about the room. As this was my first convention, it was also my first art show, I was singularly unimpressed. About halfway through the drawings and paintings, I stopped by some young ladies clustered in front of a series of hangings. Stroking my beard I asked out loud, "Are Art Shows at conventions usually this bad?" Wrong thing to say. Especially to Star Trek fans. Especially to true fans who want to see paintings and drawings only from Star Trek, whether old scenes, new innovations, or nudes. Especially in front of Karen Flannery's display.

Once, when six, I had been bitten by a rabid bat and had to go through the painful series of rabies shots. That was nothing compared to the invectives hurled at me by these four staunch defenders of Star Trek artdom. As I stood there, humbled, someone else walked up to the Flannery display, whose name tag's inscription was the first familiar name I had seen. 'Twas none other than the highly talented Debbie Collin.

"Debbie, do you know what he said about Kar— " one of the girls began before I could jump in and change the subject.

"Why, Debbie, aren't you going to introduce me to your friends?" A clever move, considering I had_never met her before myself. Of course she didn't recognize my face, but my name tag. "Terrence Oswald Knova!" she cried, removing my hand from its wrist. And so I was introduced to Kaye Johnson and Brigette Walker, coeditors of Novae & Nebulae, and to Karen Veteran and Carol Andrews. I soon found out that Karen and Carol lived, breathed, ate, wore, and talked nothing except Star Trek... and Spock. I had heard tales of such people existing, so entirely devoted to the show, but had shrugged their, off as rumors. Sigh.

My resources were such that I could afford to take Debbie, Karen, and Carol to dinner at the hotel's Skylight Restaurant; Brigette and Kaye, fortunately, hadn't forgiven me for my art criticism, and had left. I wanted to study this "Star Trek Fan" phenomenon more closely. I was fascinated by the constant exchange between Karen and Carol, with Debbie occasionally adding in, on Vulcan social customs, Spock's probable future, and fan writings. I merely listened. They babbled throughout the meal (the pork chops were a little overdone); that is, up to a certain point when they all stopped suddenly everything and stared in my direction. What had I done wrong this time?

Actually, what had happened was that the Roddenberrys had sat down at the table behind me, and the girls were straining to overhear and golden pearls of wisdom he might say. Now, I have great respect for Mr. Roddenberry, but after all, he is a human being, not a god. At least Debbie was sensible and went on eating.) So I can only treat him like I would anyone else: when they were almost ready to order dinner, I leaned back and warned him of the pork chops. He thanked me by allowing me to take his and Majel's picture. He also smiled at the girls, sending Carol and Karen into rapture. I dread to think what would have happened had it been Leonard Nimoy sitting there. Thank God he had taken a table in the corner at the girls' backs. After dessert, conversation was back to its rapid fire level. Debbie left us to go watch Star Trek episodes while the three of us thrashed out 24th century communications media in Carol and Karen's hotel room.

It must have been fifteen minutes after Debbie left that the word "Kraith" popped up in the conversation again. Curious like a cat, I asked, "That's about the twelth time this evening that I've heard that word; Kraith. What's a Kraith?" I knew instantly that I shouldn't have asked that. Then they looked at each other with such an expression on their faces that I knew I had to make a break for it. I bolted for the door. "You don't know what Kraith is'" they asked in unison, pinning me down. I envy those of you who still don't know what Kraith is. For nine hours I was transported to another time, another universe, another world of unearthly extrapolation. Only two events of what existence we know occurred during those five hours: their two roommates came in shortly after midnight and promptly joined in giving the indoctrination; and I consulted my watch shortly before 4 am, not long before I either Affirmed the Continuity or fell asleep at the base of their beds.

The Hucksters' Rtoom wasn't as crowded when I returned, despite the ranks of the convention having swollen to 4500 and growing. (To accommodate, they opened two large basement rooms for ST episodes and lectures/panels.) I bought a few books here and there, a photo from "Curse of the Flying Wombat," and a tribble for my girl friend from David Gerrold's table.... Strangely, I found the service by most dealers was unfriendly — just to me. I also caught out of the corner of my eye dealers and fans whispering and pointing at me. Not paranoia. Did Karen Flanery have that many followers... Debbie Collin had the answer to the room's hostile behavior. "I was just told you were the agent from Paramount here to check everyone's license," she announced, walking up. "Someone else added that you were a young exec from Paramount against Star Trek. The rumors are all over the con. It's your name tag." [I hastily crossed my city off] for all the good that would do.]