The Prosh Awards for X-Force fanfiction were held three times, in 1998, 1999 and 2001. They were conceived and organised by Red Monster, with the help of Desert Nomad and various judges and moderators.

They are being documented here as part of the OTW's GeoCities Rescue Project.

"While the Monster stumbled about the DC area town of Greenbelt, Maryland, in the stifling heat and humidity into which no one but herself was dumb enough to venture out, she had a vision. "Fan fiction awards, just for X-Force!" Yes. She would put together a set of awards that would put all X-Force stories on equal footing, regardless of popularity or exposure, and honor them for the rare and precious gems that they are. The details of the project took shape in her head. She decided it would be best if she got her Netfriend Desert Nomad in on the project. That way, they could split up the responsibility and share the fun!"[1]

For the 2001 Awards there were only two categories, 'Light' and 'Heavy'.

"Light stories include that which you read with your family in the house without locking the door. Comedies, mild adventures, or even serious pieces that aren't too intense. It can go as far as very light violence and mild innuendo. Heavy is what you read behind locked doors. More serious violence, sexual situations, outright depravity, and really toothy mature themes go here."[2]

The rules were also changed to restrict the number of entries to two per person (one for each category).

Most stories were judged by at least 3 people. Judges were sent a form to use for judging each submission, which included a list of questions and a point breakdown for scoring. The judges' scores for each story was averaged together to get each story's Official Score (rendered as points out of 100).

Most stories were also given short reviews, based on comments from the judges, on the website. 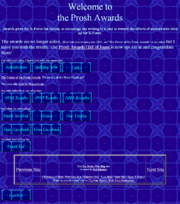 For one of the stories in the 1998 Drama category:

The good: Judge #3 wanted to say that, "I liked this story because it felt complete, like nothing was missed. The characters acted like themselves. I also like the idea of the story, so anyone who's noticed all the changes in X-Force can see how Ric might react coming back."

The Bad: Uhm… Judge #2 wasn’t as pleased as the other two about this story. "Cohesive? What?.... Not much of a plot to speak of, and it ends abruptly. There was really no point to this at all. It didn't tell me anything new." No fear though! Judge #3 did find some things that they wished you would work on, "There were very few spelling errors. I have to say it was a little simple. There wasn't very much description, and that's one of the things that made me think it would fit better as a humor story than as a drama. Really, the first time I read it I thought it was more funny than it was dramatic."

Summary: Rictor comes back from one of him many trips back home to Mexico. As he returns he sees many character changes in his teammates, and must adjust to them.[3]

For one of the winning stories in the 2001 Heavy Category:

The Ties That Bind by Domenika Marzione

From Judge #1: Well-written, expanding on a plot previously devised by Marvel canon itself.

From Judge #2: It's so nice to see someone dealing with this particular part of Cable and Domino's past without making Cable look like someone who didn't care who he was sleeping with so long as she looked somewhat like Domino! People forget that when this happened, Cable wasn't a telepath--that retcon came later, and you've managed to adapt it to an examination of this particular period WITHOUT demonizing anyone except the very nasty Tyler. Kudos. Major kudos. :) What I've just outlined is why I think so highly of this fic's originality, plot, and suitability-of-topic. This is a topic that a lot of ficcers have hit, and this fic stands head and shoulders above the rest. You've got Domino's 'voice' down here beautiful, and the minimum of dialogue, mostly on Tyler's part, is quite good. You make him sound like the raving psycho he is without going too far. No technical problems at all, as far as I can see, and the flow of the fic is beautiful. It moves with Domino's emotional state, and the switch in time-frame is done very smoothly. Brilliant job all around. :)

From Judge #3: This is a very well-crafted and well written story. Excellent characterization of Domino and a first rate explanation of why Cable never figured it out. Very well done.[4] 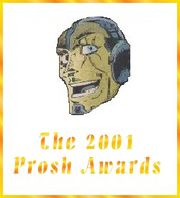 Awards were given in the following categories (Winners are bolded):

In 2001 Red Monster put the awards "up for adoption", citing difficulties soliciting submissions and getting the awards out in a timely fashion.[5]