The Collected Nicholas and Varina 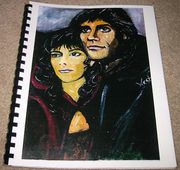 The Collected Nicholas and Varina is a het 166-page anthology of fiction with vampire original characters in crossovers from: Amadeus, Zorro, Jekyll & Hyde, Quantum Leap, Beauty and the Beast, and Robin of Sherwood.

The fiction appeared in other zines previously.

"The characters of Nicholas and Varina Tannek and Liam O'Connell are copyrighted 1995 by Diana L. Smith & Patricia C. Dunn, and all rights for the use of these characters are reserved to the authors."

The characters were modeled after Duncan Regher (actor: Zorro, TV series) and Deanna Troi (character: Star Trek: The Next Generation).

"On Cold Hill's Side"

Comments in 1993 by Rebecca Ann Brothers, one of the authors of "On Cold Hill's Side" --

Re: the RoS story. *ahem* OK, I've gotten a grip and pulled myself together. (I have very mixed feelings about this story, as there were some...'production problems' on it.) Nicholas and Varina are the creation of my co-authors; they're a vampiric couple who've popped into nearly every fandom known to fenkind, and have their own zine. Nicholas is physically modeled on Duncan Regher, and Carina's resemblance to Deaana Troi is purely intentional. I'm glad you liked the story, though. I'd have scrapped the happy ending, but that's what happens when you write with other people. (Yeah, OK, so any character assessment of me would be headed by: Does not work well with others.) [1]

Brothers also comments on some fan casting of this story in 1994:

Now I do like Dayfdd Kildragon in Hellhound, but he doesn't come across as Ray Doyle clone either, at least not to me. Lew Brody, on the other hand, is very like Bodie — and not always with Bodie"s good qualities. Cloning the actor and cloning the character are two very different things: I often do the former, but try never to do the latter. (And I don't believe anyone ever caught onto my "casting" Lewis Collins as a character in a DW story! — probably because he wasn't the least like Bodie. That was "The Eldritch Horror," appearing in BANZINE #2.) The closest I've come to that is in a ROBIN HOOD story, "On The Cold Hill's Side" (in TURN OF THE WHEEL #1), where I did come up with two characters who are a lot like Blake and Avon; hopefully that hasn't annoyed anyone. [2]

The a/u so prevalent in PROS didn't do a lot for me, but I could be hypocritical enough to like it in B7, simply because these folks appeal to me more than Bodie & Doyle. In fact I've already done something along those lines, "On the Cold Hill's Side," in a RoS zine, TORN OF THE WHEEL #1; the Blake/Gareth is a Cadfaelian monk, the Avon/Paul a nobleman beset with vampires. It didn't turn out quite the way I wanted, but that's what happens when you write with other people. [3]