The Bizarro Coloring Book is a zine of Bizarro Universe cartoons by Leah Rosenthal.

this "Duck Buck" was printed in The Bizarro Zine #3

It has a sister zine called The Bizarro Zine.

The Bizarro Coloring Book 1 was published in February 1991, is spiral bound for easy working, and is a collection of gen Blake's 7 cartoons by Leah Rosenthal. 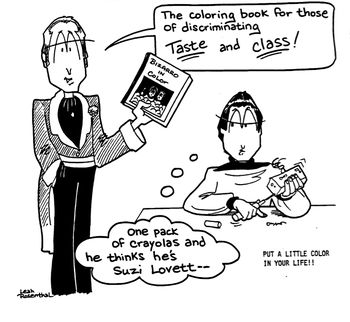 a 1991 flyer -- Vila says: "The coloring book for those of discriminating Taste and class!. Avon responds: "one pack of crayolas and he thinks he's Suzi Lovett--"

Because you asked for it (when I thought you knew better --), Poncho Press is proud to announce the upcoming escape debut of The BIZARRO COLORING ALBUM. This fanzine will feature dozens and dozens of illustrations from your favorite BIZARRO 7 stories, with almost no text to distract you. You can use them as pin-ups, or amuse yourself by creating color masterpieces, embroidery patters, or wrapping yesterday's fries. The zine will be spiral-bound for easy opening... and each and every one of the first hundred copies sold will come with your very own box of crayons! Such a deal! Plus, THE BIZARRO COLORING ALBUM will also feature brand-new art, created especially for this portfolio, with some of your BIZARRO favorites! DUE FOR RELEASE THIS SUMMER... to makes sure you don't miss out, simple send a self-addressed, stamped #10 envelope. When the zine is ready, you'll be the first to know!

My thanks to all the editors who granted specific written permission to reproduce and reprint these illustrations from earlier issues of their own fanzines: Deb Walsh, Leigh Arnold, Ann Wortham, Mary Fall Wardell, and all the rest.

"The Bizzaro Coloring Album" is finally out! And I enjoyed/am enjoying it very much. The contents are a combination of story illos, filler illos, illos from various convention flyers, and some brand new Bizzaro-type illos. All of them are done in Rosenthal's best Bizzaro style. I do have a confession to make, I haven't colored any of them yet, because each time I pick up the book I start laughing again. [1]

The Bizarro Coloring Book 2 was published in 2012, contains about 120 pages, and is a collection of gen multifandom cartoons by Leah Rosenthal.

"Bonus: a starter set of crayons with each order *while supplies last*!" [2]

The Bizarro Coloring Book 3 was published in May 2013 and contains 81 pages. Its focus is Stargate SG-1 and Stargate Atlantis.

The Bizarro Coloring Book 4 was published in May 2016 and contains 31 pages.

It contains all of the Supernatural cartoons Leah has drawn to date.

The Bizarro Coloring Book Goes British is issue 5. It was published in May 2016 and contains 50+ pages. Fandoms include: Doctor Who, Blackadder, Blake's 7, Sherlock, Fawlty Towers, Keeping Up Appearances, Merlin, Robin of Sherwood, and more.