The Big B7 Zine

The Big B7 Zine is a gen, het, mostly slash Blake's 7 clubzine 400-page anthology. It includes stories set in the "Careless Whispers Universe." 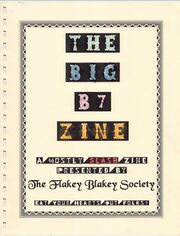 On the cover: "A mostly slash zine presented by The Flakey Blakey Society Eat your hearts out, folks!"

From the online flyer posted on March 1, 1993 to Lysator:

This ADULT B7 zine will be launched at MediaWest, 93. Hundreds of pages of exciting, romantic, provocative, B7 stories.

No frills, no art, no inflated price. Produced and published by The Flakey Blakey Society."[1]

About the origins of "Flakey Blakey":

"Yes, there is a Flakey Blakey Society - I happen to be a founding member! But we're in Cleveland, not > California! ... And we can't even claim credit for the name - we were given it by the son of one of the members, when his friend asked who all the women hogging the VCR & living room were. ("Oh, those are my mom's flakey blakey friends...")[2]

A Sequel That Did Not Occur

"I understand that ALPHA AND OMEGA and the next BIG B7 ZINE (with the sequel to CARELESS WHISPERS) are "on hold" because Hupe has left publishing. Phooey!" -- a comment in Rallying Call #19 (October 1996)

[Heat]: ...yes, I do like some of the old-skool slash, albeit as a guilty pleasure. This fic is a classic in the old-skool schmoop genre. Complete with cringeworthy, worrying metaphors and OOC exclamations, but... *damn*. I love this story. It's one of these where the characters knew each other pre-series, but were later mindwiped and forgot everything. This particular story starts on Gauda Prime, with Avon in his cell, and then proceeds in flashbacks until we arrive on GP again. The first flashback, to Avon first meeting Blake on a summer camp when they're both sixteen, is gorgeous and what makes me still love this story, despite its faults. GUH. B/A. Sixteen. Guilty pleasure, IMHO but enjoyable as a story, if you can overlook the typical old-skool bits. [3]

[Prisoners: The Shattering]: After "Rumours," Tarrant goes to Avon's cabin to make sure he's all right. They get very drunk together and have pages and pages of really excellent redhot sex. [4]

[The Darkling Torrent]: It's nice to see Avon at work and nice to see a relatively realistic portrayal of war, rather than a gung-ho raid - and of course Avon's understated but overriding concern for Blake appealed as well. And the author's stress on the effort of waiting is good. Although it's not something they could show in the series, you can tell there'd be a lot of rather agonised hanging around, in between the high points, and stories can help to fill in those gaps. [5]

[stories by the author S. Lewis]: Careless Whispers, and various short stories, many in The Big B7 Zine. The sex scenes between B & A are red-hot. In fact, this author may be my very favorite for pure unadulterated sex. She sees B/A as an irresistable grand passion. Yeah. [6]

[zine]: This zine may be massive, but you have to have the same tastes as the writers to get any value out of it. I only enjoyed about three stories in the entire zine. But then I'm an A/B fan and I hate soppy stories. [7]

I'd second the recommendation for BIG B7 ZINE. It's huge, no frills, and with a wide selection of stories to most tastes. (And very little A/V— YAHOO!) Particular favorites were: Like a Lamb to the Slaughter; A Private Revolution; Old Customs, Present Considerations, Stop and Smell the Roses; The Darkling Torrent; I Dreamed Last Night; Prisoners: The Shattering (OK, it's A/T—I've developed a taste for that pairing though; at least it's got some oomph, something missing from those deadly A/V things); Exile, Take Two (and my warped mind does rather fancy the idea of B/T as well); To Sleep, Perchance to Dream; A Time for Healing; A Couple Revolutionaries Sittin' Around Talkin'; Season of Madness; The Haunting.

There was surprisingly very little that I absolutely could not stand, which is a rare occurrence. Although I have a more give-and-take attitude about adult sines. Having once sampled an all-A/V zine, I learned never to do that again, and by tribbing to SOUTHERN LIGHTS I've managed to avoid having to pay for zines that are very hit-and-miss (the last issue was extremely disappointing). One thing about several stories in BIG B7 2INE got old pretty quickly though: the attempt to reproduce the sounds of sexual coupling. I hope the authors of the stories meant it to be funny; if it was meant to be erotic, it was a dismal failure—at least to this reader. I'm sorry, but paragraphs of gasps and grunts and moans had me in stitches. Some things really are best left to the imagination. That's more detail — and reality— than I want. [8]

[zine] But in defence of The Big B7 Zine (my God, I never thought I'd hear myself say *that*!), while I thought it was abysmally soppy, out of character, unlikely, unbelievable and worst of all, dreadfully boring--there are people out there for whom this zine is just choc-a-bloc with exactly the sort of thing they like. Now, I confess that such an opinion is absolutely beyond my comprehension in this particular case, but it's definitely a case of to each their own. [9]

BIG BLAKE'S 7 ZINE - This zine almost succeeded in putting me off slash for life. I don't mind the pairings, one of the few decent stories in the zine was a long Vila/Tarrant story. What I objected to were the endless short, badly written stories that consisted of a bedroom scene and nothing else. I don't mind PWP's (Plot, What Plot?) in moderation, but I do at least expect them to be well written. I much prefer stories that have something to say. Only about four stories in this massive zine left me feeling that I'd read anything interesting. Good slash should expand the characters, not constrict them. I won't tell you where to buy this zine, because I CANNOT recommend it. [10]

[zine]: Well having finally got to the end of the Big B7 zine, there was a decent story at the end, and two somewhere around the middle that stuck in my mind, but beyond that, little of much merit. Basically, as you describe it, soppy and boring. I think the best story in the zine was actually one in which nobody slept with anyone at all. Can't remember what it was called, but Avon was recovering from being attacked, and Blake slowly realises what the experience has done to him.

There was one story that was so badly out of character that I am sorely tempted to write an alternative version. Unfortunately the plot was so improbable that I would have to work out a new one that used the same basic premise. Then I could flip the original conclusion on its head.

To be honest, the zine as a whole rather put me off slash, but if you can tell me some specific zines to try with good in character stories, then I'll give one or two a try. I need specific zines/issues to go for. I can't get zines at conventions - the next B7 con over here is in October - so I have to get them mail order. This in turn requires the gamble of getting dollars and entrusting them to people on the other side of the pond. And as I know from bitter experience, if someone tries to stitch you up from that distance, there isn't a damn thing you can do about it. (Not an experience I've yet had in fandom, but in another field) So please, only suggest zines where the editor is fairly quick at filling orders.

Avon confessing his undying love seems so improbably that it is usually enough to put me off a story no matter how good it is otherwise. [11]

[zine]: The slash zine I like least is the Big Blake's 7 Zine. Although it contains a few very good stories (especially a long Vila/Tarrant one), there are many many duds. [12]