You may also be looking for the story tropes Bodyswap or Genderswap. 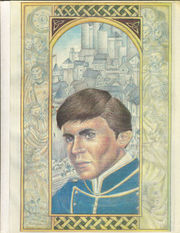 Swap is a Chekov-centered adult het 200-page novel written by Jane Seaton. It was illustrated by Teegar. It was co-edited by Berkeley Hunt. 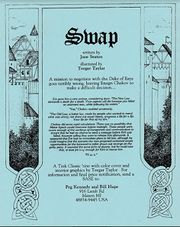 a flyer for "Swap"

From Bill Hupe's catalog, "A mission to negotiate with the Duke of Eaye goes terribly wrong, leaving Ensign Chekov to make a terrible decision."

I got to read Swap before any of you. Really, it pays to encourage fan authors and artists; this isn't the first time I've been fed someone's novel in installments. For the past year, my mailbox has been doing a fair imitation of the magic porridge pot; the more fat manila envelopes I took out, the more appeared. It was just too terrifically cool to get these things all covered with English postage and Customs stamps and know what I was about to be treated to fresh new chapters of Chekov's bravery and sacrifices, grief and angst, hope lost and restored and lost again. Thanks, Jane. The envelopes from Teegar, all marked BENDETH NOT and driving the point home with silhouettes of dead mailmen, heralded heart-quickening depictions of our Pavel's sufferings done in pencil and bordered with Celtic knotwork. And almost none of it really sucked. (Illustrator's Note: Thanks, Berkeley.)

To you fans who had to wait until Swap hit the dealer's table and then pay for the privilege of making Pavel's adventures you own, try not to hate me too much. I'm one of you. I, too, was condemned from an early age (fifteen, when I decided that Chekov was way cuter than Bonanza's Little Joe) to roam convention huckster's rooms in search of fanzines -- any fanzines -- that feature my favorite ensign. Like you, I paid twelve dollars for a 'zine because it contained a poem and one cartoony drawing of him. Like you, I spent hours pawing through the used-zine boxes in my hunt for the four issues of an old (old!) mimeo-zine that gave the ensign a piece of the action. Like you, I ordered all ten issues of the only all-Chekov 'zine then on the market, a 'zine that in its entire history featured only two good pieces of cover art, and maybe a half-dozen passable stories, but was highly satisfactory for the sheer magnitude of injuries visited upon our hero. And like you, I have harbored an un-Christian hatred for those lucky Star Trek fans whose guardian angels saw to it that they fell in love with the show's so-called primary characters. The characters who got lots and lots to do. The characters all of the fan authors were doing stories about: Kirk, Spock, and McCoy. I have watched those fans with envy as they staggered happily through convention hallways with their arms overflowing with Big Three merchandise: eight-by-ten glossy photographs of McCoy, Mr. Spock marshmallow decanters, ceramic Captain Kirks with clocks in their bellies. And most especially, all those Big Three 'zines. Color-covered, spiral-bound, done in calligraphy on gilt-edged vellum. Or so it seemed to me, and I'm sure to you, fellow searcher after the Hold Grail and the Quality Chekov 'zine.

Now, enter Jane Seaton and Teegar Taylor with Swap. At least, a piece of Pavelobilla both engrossing to read and beautiful to behold! Bask in the glow of its magnificence and feel your loathing for the Big Three fans dissolve into gentle pity. Hold the 'zine in your hands with the knowledge that your exalted state can never be theirs. Saracen dogs they are, but despise them not, knowing this, the Ninth and Innermost Circle of Chekov-Fan Nirvana, is closed to them forever.

So many of the accouterments of the truly nifty 'zine are here -- color cover, spiral binding, and an adorable, dark-eyed Russian who doesn't scream once -- that the substitution of plain ol' paper for vellum shouldn't be too much of a hardship. I hope the gift editing isn't missed either. Seems the monastery down the street beat Bill Hupe to the print shop and cleaned them out. -- Berkeley Hunt, co-editor

2019 Comments from the Artist

Graphically, this ‘zine was the most ambitious project I ever attempted. I was very influenced by Jean Kluge and Marty Siegrist’s “Pulse of the Machine.” It’s hard to describe the impact that ‘zine had on fanartists. Everyone went crazy for it. It expanded our idea of what constituted excellence exponentially. It didn’t matter if you were a Data/Tasha fan or not – You might even hate Star Trek entirely --- still, you had to have that ‘zine. Every component – fonts, graphic elements, everything – contributed to the storytelling. It wasn’t just pretty pictures… But the pictures were wondrously pretty. So, into this post-“Pulse” world, I start working on “Swap.” I’d always drawn in this sort of Art Deco style, but now I’m laboriously learning how to draw all these Celtic knots. Every chapter has to have its own frame in addition to the regular illustrations which are all tied together with Book of Kells-ish borders. It was a great deal of work, but I’m very proud of what I was able to achieve.

Unfortunately, we put out “Swap” and “Chekov: In Love and In Trouble” at the very lowest point of popularity for that character in Trek history.

This was the mid 1990’s. The last of the movies with the original cast members had been made and everyone had started to view the original series in the rear view mirror of history. Fans were much more excited about TNG, DS9, and the brand-new Star Trek: Voyager series that was just coming out.

Walter Koenig had moved on to greener pastures with Babylon 5 and actively encouraged his fanbase to do the same. He was a fixture on the convention circuit and was always making sarcastic comments that got that point across pretty clearly. I hate to place too much blame on him, but it does make it hard to fan the flames of enthusiasm for a character when the actor is going around essentially saying, “You don’t still like that old thing, do you?”

Although my publisher, Bill Hupe, was extremely supportive and the people who I could beg and brow-beat into buying a copy loved it, the ‘zine didn’t sell well. Therefore despite being well-written and –though I say it myself – beautifully illustrated, “Swap” today remains an obscure gem of fanfic history. [1]

I was lucky enough to read this story in draft recently. This means I cannot comment on the finished look of the zine, although the author tells me she is very pleased with the illustrations, which are by established artist Teegar. The story, however, I have no hesitation is saying, is excellent. The central character is Ensign Pavel Chekov, but don't let that put off any who are not especial fans of his. This is an absorbing and thought-provoking story, which incidentally puts some more flesh on the bones of a character who (like many of the supporting cast of Classic Trek) was rather short-changed on screen.

Intended as an 'antidote' to romanticised fan fiction which has the hero sweeping all (including the heroine) before him, this story strands Chekov on a planet where he has been convicted of causing the death of one of the local overlord's warriors. The sentence? To take the place (and the name) of the dead man, including living with his cuckolding wife, new-born son and duties as military company commander where the Klingons seem about to become 'advisers' to the garrison.

As well as a convincing account of how the Ensign struggles to retain some dignity and sense of personal identity in the face of all this, including the possibility that his shipmates believe him dead. Swap tries to look at the Federation/Klingon conflict from the point of view of a population to whom the Prime Directive of non-interference appears to be simply a Federation plot to keep valuable information out of the hands of people who might benefit from it; the Klingons, on the other hand, seem only too willing...[2]