Chekov: In Love and In Trouble

Chekov: In Love and In Trouble is a 193-page anthology of Star Trek: TOS stories by Teegar Taylor, Jane Seaton, Berkeley Hunt. Art by Teegar Taylor and Marty Siegrist. Four full-color illustrations on the cover and used through-out the volume. 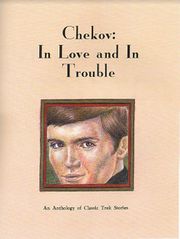 One of Its Creator's Comments

... we put out “Swap” and “Chekov: In Love and In Trouble” at the very lowest point of popularity for that character in Trek history.

This was the mid 1990’s. The last of the movies with the original cast members had been made and everyone had started to view the original series in the rear view mirror of history. Fans were much more excited about TNG, DS9, and the brand-new Star Trek: Voyager series that was just coming out.

Walter Koenig had moved on to greener pastures with Babylon 5 and actively encouraged his fanbase to do the same. He was a fixture on the convention circuit and was always making sarcastic comments that got that point across pretty clearly. I hate to place too much blame on him, but it does make it hard to fan the flames of enthusiasm for a character when the actor is going around essentially saying, “You don’t still like that old thing, do you?”

Although my publisher, Bill Hupe, was extremely supportive and the people who I could beg and brow-beat into buying a copy loved it, the ‘zine didn’t sell well. Therefore despite being well-written and –though I say it myself – beautifully illustrated, “Swap” today remains an obscure gem of fanfic history. [1]

I did the artwork for the cover, the illustration for “Trickery and Deceit” and “First Love” (both written by Jane Seaton). All three of these were colored pencil drawings on colored Bristol board. The two drawings for “Fear Itself” (by Berkeley Hunt) are by Marty Siegrist. They are both in graphite pencil on Bristol board.

Producing a ‘zine with this much full color interior art was still fairly expensive at that time. I was about to say it was a real mark of the faith my publisher, Bill Hupe, had in me, but that’s not exactly true. Bill knew the market better than anyone. He knew this ‘zine wasn’t going to make much money. Chekov was just not that popular. Marty Siegrist was a big name artist, but I was not. None of our writers were big names outside of Chekov fandom – which was a tiny, tiny, tiny subset of Trek fandom. So, sinking money into putting out a thick, anthology-sized ‘zine with that much expensive art was a longshot most publishers would have taken a pass on.

However, I had worked for Bill Hupe for a long time and he really liked my work and he really loved this ‘zine. He told me, “I’ll sell a couple hundred copies of (name of ‘zine that was inexplicably popular despite being total crap) just so I can afford to print something like “In Love and Trouble.” Folks who bitched about the sheer tonnage of drek that the Hupe fanzine publishing empire churned out at the height of its powers never paused to look at that side of things. There were always little “diamond” projects being nurtured underneath all those mounds of coal… [2]

Princess Snowflake: Not my favorite in the zine, but still a delightful story to read. I know they can't *all* be angsty, but I seem to thrive on that... I had trouble sorting everything out in it. Usually I complain that the *end* of a story isn't long enough. On this one, it would be the beginning. I needed more information on which to base my understanding of the story. 3/4.

Trickery and Deceit: This was one I had read before. A good story, interesting premise. Chekov in trouble... I think I would have liked to have had more about WHY they were doing to him. There wasn't enough for me to really buy into Kirk doing this to him. 3/5.

Fear Itself: Good short. Quick and to the point. I liked the tension between Chekov and McCoy, but would have liked to have seen it build up a bit more before going to the planet. Some of the insecurities revolving around Kirk could have been elaborated on as well, since that is "resolved" later. I read it it twice. (Usually a good sign.). 4/5.

Home Again. I'm glad you put the comments in the editorial, Teegar, or I would have wondered about this one straight off. It would have seemed a bit of a ripoff of the TNG episode, yet THAT is similar to Twain's "Ship in a Bottle" or whatever that short story was called. This one was believable, although at times I had trouble following what was going on. I would have liked to have had LESS guessing about who the kids were (first, second, third, who was getting married, who the grandkids' parents were, etc.) There was a lot of jostling already and I didn't need more. I found Chekov acting as he probably would have in that situation. (I'm glad you had him having trouble learning languages, too!)

The ending got confusing as the story came out of its inevitable tailspin. Did Chekov truly forget what happened? I would have liked it to be a bit more definite, as I found that to be more annoying than intriguing. I liked the two of them back to arguing and I loved Sulu's wondering about someone naming a kid after them. I hadn't caught that with the Karu, but it certainly worked. Only trouble I had with it , was that Chekov, even when he was coming out of it, didn't seem that close to Sulu, someone he had named his first child after. I was a bit disappointed by that.

Those are just a few minor points though, in an otherwise enjoyable novella. Good work. 4/5.

Overall remarks: I felt I got a deal for my money. I got stories about Chekov (!!!) written by people who love him. He is not relegated to a "Dare it is, Keptin" line in a zine. The artwork was great. I loved the two in "Fear Itself" but I'm partial to that style. The color ones ere fun to have in a zine as most illos are usually b/w, and they reproduced well. I liked all of them although I wasn't thrilled with 70% of the Chekov's (I think it is the cheekbones and eye slant that doesn't work for me on some of them.) The cover and presentation is great, although the zine title is kinda strange. [3]