From Fanlore
(Redirected from Stellar Con)
Jump to: navigation, search

StellarCon is a general, speculative fiction convention held in the Greater Metro area of Greensboro, North Carolina usually around mid-March. 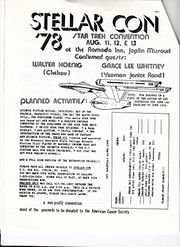 Average attendance at the convention is around 500 people.

StellarCon is produced by The Science Fiction Fantasy Federation of the University of North Carolina at Greensboro. The convention staff consists of volunteers from the UNCG student body, UNCG alumni, and professionals from throughout the southeastern United States.

StellarCon was first held in Elliott University Center, on the campus of UNCG.

In 1992, Jeff Smith (the convention manager that year) took it off campus for the first time to a local hotel. It has remained off-campus since that date.

The third con was August 11-13, 1978. It was held at the Ramada Inn in Joplin, Missouri. Confirmed guests were Walter Koenig and Grace Lee Whitney.

High Point, NC — If you've not already noticed, the author of this article wishes to remain anonymous. It's more from the embarrassment of saying that money was actually spent in going to this Con, than from the fact the Con was a bust. You'd think after doing a Con for 18 years, some one could figure out how to get it right. Well apparently this is not the case with the folks who ran StellarCon 18. For those folks that wisely stayed away from this Con, the only thing that they missed was the experience of seeing how NOT to run a convention.

The Kitty Hawk away team consisted of 6 semi-permanent members and 3 who beamed over to High Point on Saturday. John L., Paul M., George H., Aretha F. , Madiline K. and Sharon S. made up the brave, but not so smart weekend long away team. The smart, but so-so brave, members, those who beamed over for Saturday's events, were Ringo S., Yoko 0. and Whitney H.

Not to be totally negative about this experience, I will say that the guests were wonderful. Mark Lenard is a guest that everyone should see at least once. Mark was a real trouper, he stayed and signed autographs for everyone long after many guests would have called it a day. Bjo and John Trimble were a real treat as always. Make sure you get to Creature Feature in April to see Bjo. If anyone knows what it's like to be a fan it's [[Bjo Trimble]]. Probably the highlight of any convention that Bjo attends is her slide show. Over the years, Bjo has taken photos of the backstage goings on of ST, ST:TNG, ST:TMPs, ST:DS9, etc. The Klingons were out in force for the Con, I think the Piedmont/Triad area must have the highest concentration of Klingons per square mile on the East Coast. But, in contrast, the lowest per Klingon intelligence quotient. To be fair, Klingons are known for their Honor and Bravery, not for an over abundance of grey matter. The Radisson High Point is a wonderful hotel, our rooms had just been redecorated. Being High Point, the Capital of the Furniture World, the furnishings for the rooms made it feel like you were staying in your best friends guest room. I found myself much more relaxed staying in these rooms than at any other con I've been to. The Country Market restaurant while a bit pricey, what good hotel restaurant isn't, had a very elegant menu selection.

Most of what I (and others) found disappointing was the lack of organization and information sharing (I've been saving a long time for that 5 dollar phrase). A good example is that many people did not know that there were 2 dealer rooms until Sunday when a sign was put up to indicate that there was another whole room of dealers.

The Friday night banquet, was not what and when many expected. Many Con go'ers thought the banquet would be held Saturday night and were mildly surprised to find out when they arrived late Friday night, that the banquet was already over. I for one am glad I missed the banquet, being a Friday during Lent I probably would have starved. I've been told the main entrees consisted of BBQ and chicken.

The scheduled entertainment for the banquet, SCA, which they needed was taken down earlier in the day, which left the SCA in a bind, since many showed up expecting to be served dinner as payment. In other words, 'No show, no dough', which really annoyed the SCA. The Con personnel gave Region One activities only one room for two hours both days, for our scheduled activities. I saw no other rooms set aside for individual department meetings. So this reporter was unable to sit in on any departmental meetings. Events that were listed in the Con flyer such as ConTV was nonexistent, I saw no VR machines or Technology room. Even though it does say in the flyer that, 'Event List subject to change.', no where in the Con program did it list a modified Event List.

The Radisson did not carry the local FOX station on their hotel TV, so con goers could not see the episodes until lam Sunday morning, when they were supposedly shown downstairs.

This one ranks up there with the FOX screw-up at MOC several years ago.

Sunday again was an 'Up in the air affair', no one knew till that morning what events were going to take place. But, by 11am events were pretty much finished up.

I'll admit the Con sounded great on paper, but in reality sometimes words don't do justice to reality.

The names in this article have been changed to protect the innocent and emotionally embarrassed. (Not that any of these people were innocent or emotionally stable to begin with.) [1]