Star Borne Press was founded by one of the earliest fanzine publishers, Margaret Basta. She, along with her sister Laura Basta published the Star-Borne Star Trek newsletter in the early 1970s. Margaret later went on to publish her own fanzines under the name "Star Borne Press" in the 1990s.

Star Borne Press is now the new agent for orphan zine sales at MediaWest*Con 18. If you publish and wish to sell your fan zines and newsletters at one the the major zine conventions of the year, now is the time to make arrangements. There really is not that much time left to consign your zines for the Memorial Day weekend convention being held in Lansing, Michigan. Star Borne Press understands the difficulties that some consignors may have experienced with former orphan zine table dealers in the past. We know that you may have reason to be hesitant to consign your zines with somebody new. But we want to change things. We want to be a different kind of orphan zine table dealer... We are accepting zines in any fandom, rated from children's reading material to adult and slash. Even if you have a few copies for sale, contact us. MediaWest*Con 18 members are known for their eclectic Fannish tastes. 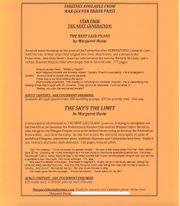 In 2013, two of Basta's zines, The Best Laid Plans and The Sky's the Limit, were sold at MediaWest*Con's orphan zine table with the press "Mar-Jan for Error Press".