You may be looking for Songs of Innocence, Songs of Experience, a Star Wars zine. 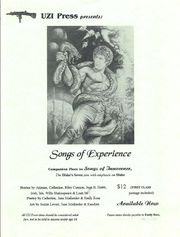 Songs of Experience is a gen and mostly slash Blake's 7 anthology. It has a sister zine (Judith Proctor's Blake's 7 site calls it "a continuation") called Songs of Innocence. These titles are a reference to a collection of poems by Romantic poet William Blake.

The cover of Songs of Experience can be seen archived here.[1]

You mentioned the "Blake and a Snake" cover of Songs of Experience, What is this with Blake, Avon and snakes? Were the writers whose stories are in that zine shown the cover as inspiration? Was it coincidence that Sondra did something similar in her novel Beloved Adversary?[2]

Well, I haven't seen the Lovett cover of Songs of Experience "in person" (so to speak], but Rebecca sent me a Polaroid snapshot of it. From what I can make out (admittedly any work of art is going to lose a great deal when thus reduced in size and clarity), it's not, in and of itself, worth buying the zine for. I do like the change of title, too, though. Kind of demands a third issue to complete the triple reference, doesn't it? [3]

See reactions and reviews for the art Rebel with a Cause.

See reactions and reviews for Sticks and Stones.

See reactions and reviews for Sex, Lies, and Revolutionaries.

See reactions and reviews for An Evening with Friends.

See reactions and reviews for Serpents in Paradise.

See reactions and reviews for Eternity.

See reactions and reviews for It Don't Come Easy.

See reactions and reviews for B/A/Ts.

See reactions and reviews for A Confusion of Enemies.

See reactions and reviews for My Heart Leaps Up.

[both zines]: These two, companion pieces featuring stories centering on Blake (or at least Blake *and* someone, usually - surprise! - Avon) are very similar in look and to a great extent in feel. Both have *gorgeous* Suzann Lovett covers, Innocence with Blake sleeping with a unicorn, Experience with him fighting some sort of serpent (with the Liberator in the background). She does draw Blake wonderfully, and these are two of the best covers I've seen. Inside there are a few pictures by Randym (not to my taste) and a lot of William Blake woodcuts (very much *to* my taste).

[comments about Songs of Innocence.]

In Songs of Experience, the general quality is somwehat higher, though there is nothing anywhere near as good as the xBryn Lantry story. One each by Irish and Willa Shakespeare, both of whom have written very good stories elsewhere; these are both uneven efforts with some good patches. Irish's 'Sticks and Stones' is more a series of sketchy scenes than a stories, though some of the scenes are good in themselves. In Willa's 'Serpents in Paradise', the plot is to me quite unbelievable, and seems to lurch from potential tragedy to something perilously close to comic farce; the dialogue, usually a strong point, is patchy but usually fun to read and mostly (if not always) in character, and she can write genuinely Avonish (and funny!) one-liners, for which I am always grateful.

There's two linked pairs of PGP stories, one by Leah S., slightly static dialogue pieces but quite well done, and another pair, longer and more rambling, by Arianne; also a thankfully short, brisk and quite entertaining Blake/Avon/Tarrant piece with a neat little coda in Vila's voice, and several others that did very little for me. And one, 'Sex, Lies and Revolutionaries', that I actively hated, not so much for the Blake/Avon central plot, but the cold and rather vacuous portrayal of both Vila and Tarrant (the second pair of lovers). [4]

[both zines]: Ok, so maybe my expectations were set really low before 'Songs of Innocence and Experience' (by things like the reviews on Fanlore, and my own friend elviaprose who told me Panacea was the only one worth reading) but I actually enjoyed the experience of reading both zines. None of the fics rocked my world, none of them are making The List, but with only one notable exception (Pros crossover) the contents of these zines were relentlessly 'not bad' or 'quite nice'. Which I appreciated. If you too are 'semi-exhausted after a hard day of sedentary pursuits and fed up with stories about how Blake is a rapist or stories that don't bother to say they love each other, only that they're attracted to each other' then these zines could be for you!

The almost overwhelming, repeated problem of all these stories is 'that was too easy' - indeed there's even a bit in one of the PGP fics in which faithful Deva (having been told that Blake and Avon - only recently released from Blake's prison - are now lovers) says something like 'that was quick!' He's right - as usual. But it's the sort of problem that, if I have to forgive a problem, I'm OK with.

Which is not to say I'd pay $30 for one of them - there's a copy of 'Songs of Experience' on eBay at the moment for about that price. I think I'd feel annoyed if I'd paid that. But I paid nothing - I think I might also feel all right aoout paying $8 a copy, which was apparently the original price (there's an advert at the back). That seems reasonable.

Presentation wise - those are some excellent Suzan Lovett images (how amazing is that snake-wrestling one? I love it), but they're just printed onto beige card, and then stapled together. It's a bit of a shame. I know that's why they only cost $8 new (which is ideal - well done, publishers), but it would also have been nice if they'd have looked more... special. I know have cake/eat cake, but it's worth pointing out. I'm not usually disappointed when I look at a zine.

Inside the font is a readable size, but there's too many clip-art borders to be taken seriously in 2014. And the William Blake images haven't translated well to black-and-white photocopies. The other thing to say about the presentation of both zines is that you don't get a lot of fic on the page in either, although SoE corrects the double-spacing of SoI.

One more whingey point before we get onto the part that, as I say, I quite like - I would have liked the themes to have been more strongly played, particularly in the first one. You can sort of imply that any fic about Blake is a song of experience, but I have difficulty identifying much that's innocent about the first set. I guess Blake is a virgin in the first one, and maybe the pre-industrial civilisation are innocent... but why is that prostitute story in there?

Actually, wait - there's time for another thing I do like! I like that someone wanted to publish a whole zine full of Blake-centric fic. I support that. It's interesting that almost all of it is B/A, even the gen. Even though I understand objectively that that's easily the most popular pairing, I would have thought some B/J or something might have snuck in. As I said - interesting. Just because of fandom-mentality (Blake fans recognise that he's most interesting with Avon. Or just that Blake fans also really like Avon, or Avon fans wanted to get in on this zine ;) ). Let's face it - I would probably have written a B/A for this zine.

All in all - I liked this zine.

[See Aralias' comments about the individual stories in "Songs of Innocence" on their separate Fanlore pages.] [5]