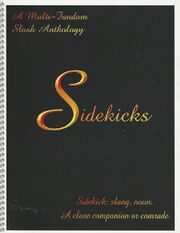 Sidekicks is a 228-page mostly slash, with a tiny bit of gen and het, anthology of multifandom fiction. Color cover designed by Bast; interior art by Bluespirit.

[Fantasy in C Major]: Being sadly bereaved of my beloved pair Bodie/Cowley, and having been confirmed by several experiments that the Doyle /Cowley pairing didn't work for me, I tried to find at least a passable substitute, still Cowley centered but with a reasonably apt equivalent for Bodie. It appeared that only Murphy could play the part; though, to my taste, as a rather dull stand in.

Don't take it as a criticism of the story or the author's talent. Quite the opposite; she manages to get the best from a character which has not very definite features in the show and so, may be turned into whatever pleases or serves the writer. Here he has inherited of all the boyish charm, the mischievousness and the sex appeal of Bodie (but without the darker and more complex elements of the older man's personality). As he is, however, he has not much difficulty to drag a bemused and clearly smitten Cowley in a plot of his invention that involves the set up of a sex scene in a gay bar!

It's a testimony of the author's writing skills and cleverness that she succeeds in making this comedy believable. The picture of Cowley and Murphy tightly embraced on the dance floor is priceless. Though a little too mellow and tractable, the Controller (who doesn't control many things this time), remains more or less in character. He is not belittled in his misadventures (well, not too much) and, like in the other stories of the sort I presented, his weaknesses look more endearing than ridiculous.

As a matter of fact, there is, really, something pathetic in this character (his loneliness, his emotional and sexual self repression, something probably tragic we suspect in his past) that a few authors have sensed and hinted, if not developed. I picked a touching passage about that aspect in Elspeth Leigh's story:

Murphy smoothed his lips across the old battle scar on Cowley's thigh, offering a tenderness that surprised and moved Cowley. In a way, Cowley himself was a scar, damaged and improperly healed. Murphy's gentleness to the wound was a balm to both man and skin. Yet strange, almost awkward, the expression sounds right, in tune with the sadness and melancholy that envelop the outcome of the adventure, in Cowley's mind:

He wondered how he could be having such mixed feelings, why he simply could not appreciate the experience. And he knew at the same time he mourned that this would not, could not, happen again, not with this man, nor given Cowley's position, likely with any other. It was a beginning and end, a fait accompli. Still, he should be grateful, not grieving. The "fantasy" is realistic, after all: no romance, no sentimental delusion, just the severe lucidity of a man of power and duty.

And did I precise it's very neatly and elegantly written? [1]