Rassilon's Star is a gen Doctor Who anthology of fiction and art. The title is a canon reference to a power source used for time travel.

It has at least four special editions: 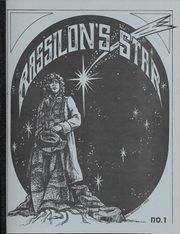 Devoted to the fourth Doctor (Tom Baker), this zine easily transports you away from the dreary, every day world and moves you quickly through evocative, poignant, whimsical fantasy. So successful is this zine at whisking you away from reality, that even the pages themselves take on a mIythical, other-worldly quality. To begin with, RS is a beautiful looking zine. The color of the paper is a kind of bright off-white, like parchment, and the pages are printed with gorgeous, varying borders. Even the contents page is a stunner. Layout, reproduction and typing are excellent and in one story, the use of the Olde World calligraphy typing element is an excellent attempt at making words physically, visually, capture the fantastic atmosphere they're describing. The front cover by Gail Bennett is lovely, with the Doctor looking up at the stars, standing on a large rock. The bacover by Stephanie Hawks (clearly one of the best artists in DW fandom) is a priceless dual Tom Baker portrait, stylistically elegant while still emotional. All of the art inside is quite good, although sometimes inappropriate, since much of it is drawn in a humorous cartoon style by Cheryl Duval which occasionally doesn't fit the serious subject matter being illoed. In other cases, however, they are quite apt and truly serve to illustrate the insane goings on. My favorite inside illoes are by Phred. One is of the Doctor surrounded by various mythical beasts. The other is a haunting, brooding piece with Andred and the Doctor by a fire in a forest, while the image of Leela (Andred's wife), the Doctor's former savage companion, overlooks them from above. RS comes with an equally attractive 4 page newsletter called The Eye of Harmony, which offers info on the zine's contributors (a feature all zines should have) and other tidbits. Of the poetry in RS, the lost memorable are 'Reflections of a Former Companion" by 5.J. Nasea (an economically effective piece, especially within the last four lines.) "But Not Forgotten" by Linda Mallory (a poignant piece written in Leela's point of view, while she is left on Gallifrey, missing her ever itinerant friend, the Doctor), 'Your Changing Faces' by Barbara O' Quinn (Sarah longing for the Doctor's return) and "Song For Sarah" by Maggie L. Johnston (a sweet little piece that has the Doctor missing Sarah.) As for the prose, they may be short pieces, but most are quite effective and memorable nevertheless. "Romana" by Cheryl Duval is heart-breaking, as the Doctor silently thinks to himself about leaving the contumacious Time Lady. In just two pages, Duval manages to do exactly what a vignette is meant to do: deliver powerful, emotional impact within a very restricted space. "Storyteller" by Phred is even more impressive, and unqualifiably my favorite piece in the zine, involving various mythical beasts waiting for the periodic visit of a certain Doctor whose tales provide a joyous holiday for the warring creatures. The conversations between the beasts and the Doctor's dialogue is strikingly convincing. "A Man's Best Friend" by Barbara O'Quinn is a short-short that skillfully convinces me of something I've always suspected: The TARDIS is not just another non-sentient machine. "Enchanted Planet" by Maggie Johnston and Laurel Stewart is an uneven, tongue-in-cheek story wherein Sarah and the Doctor are sent on a mission for some mysterious Power, and on the way, encounter an enormous maze and illusions right out of "The Wizard of Oz". "Perchance to Dream" by Barbara O'Quinn is an extremely moving vignette about a death dream Sarah has aboard the Tardis. What's so memorable about this is the Doctor's gentle affection toward Sarah. "Reverie" by Cheryl Duval is a nicely developed short story that has the Doctor sleepily musing about Romana and her affinity for annoying him. But I don't think. Romana is as bad as this piece describes her to be. Then of course there's the knittng pattern to the 18th season scraf worn by the Doctor, all 25 feet of it. [1] 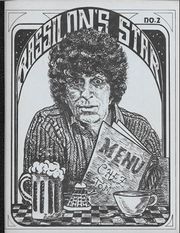 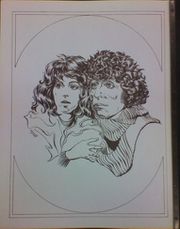 back cover of issue #2, Jane Facher

This Doctor Who zine was voted 'Most Popular Fanzine' at Panopticon West in 1984, and it deserved to win. Cheryl Duval puts out one of the best DW zines I have ever seen. This zine is beautifully laid out, and there is a wide selection of poems, stories, and filk songs all about the 4th Doctor. the artwork is uniform only in its excellence; the art of such talented fen as Gail Bennett, Jane Fancher, Maggie Johnston, Chris Cook and Cheryl herelf in one zine is quite a treat. The storie? Well, there's 'Temples of Darkness, Temples of Light,' an exciting and profoundly moving adventure where the Doctor must not only battle the bad guys, but his own fears as well. Gail Bennett wrote and provided the accompanying illustrations. I was so impressed with this story that I wrote Marvel Comics to suggest that they use 'Temples' as an original story for the Doctor Who Comic. (A couple of good stories like this one could have kept that comic going. But nooo! Oh, well.) Then there's 'The Hunt' where the Doctor accidentally winds up replaying 'The Most Dangerous Game.' What makes this story even better is that the Doctor is telling you the story and Johnston and Stewart capture the essence of the 4th Doctor so well that I almost forgot it was a story! 'The Warrior and the Wizard' describes the interaction between the Doctor and Leela in-between 'Face of Evil' and 'Robots of Death.' It rings so true to the characters, it's amazing. There's Tom Baker and the Menace of Mandragora' where the Doctor has Tom Baker as a companion. It sounds silly, but it works well. And then there's 'Doctor Who and the Land of Oz.' (And you thought you'd seen everything in fanzine. HA!) Sprinkled throughout the zine are many enjoyable poems and filk. I liked them (there's not a bad one in the bunch) but my favorie would be 'Tardis Lullaby'. Wherein a companion expresses affection and concern for a certain Time Lord.. Charming, and I'm just scratching the surface of the table of contents. So, listen up, all you Doctor Who fans! We're talking grade A+ fanzine here. Support Doctor Who fandom by buying high quality zines like this one. Get it? Got it? Good. [2] 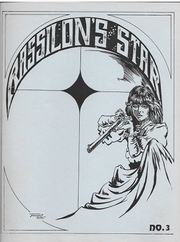 Cheryl Duval, award winning DW editor, puts out a grade 1+ zine. this baby is 190 pages long, crammed to overflowing with stories, poems, filks, etc. all about the 4th Doctor and Sarah Jane Smith. As with all of Cheryl's works, it is professional quality and executed with love and good taste. Things may get a little silly within the covers of this zine, but it never gets cutesy or stupid. Where to begin? There's 'Promises' where the Doctor and Sarah go back to the time of King Arthur and find far more than they bargained for. "A Short Yarn' is about what the Doctor was thinking during the infamous 'costume change' in 'Robot.' 'As Time Flies to Wanton Boys,' the Doctor and Sarah are on safari to find out what, or who, made them crash land this time. Then there's "Wish Upon a Star' that proves that old saying about absolute power (and the Doctor as a ten-year old?!?) On the lighter side, we have 'Tom Baker and the Dawn of the Daleks' where Tom Baker winds up as the companion to the 4th Doctor. It may sound dumb, but the author pulls it off neatly. 'Serendipity' wherein our hero meets Sarah in her reckless youth, is a real charmer. 'Flower, Flower, Burning Bright' is well done as well. But 'Wedding Bells and Cloister Bells' -- well, I don't want to spoil your fun, gentle reader. All I'll say is it's a hoot! The art in this issue, as in #2, is a wonderfully electric mixture. Fen artists such as Anne Davenport, Pat Degan, Maggie Johnston, Melody Rondeau, and Cheryl herself makes this zine an absolute pleasure to the eyes. The light buff color of the paper cuts down on the eyestrain that pure white paper inflicts and adds yet another touch of class to the production values. To sum up, issue #3 is another feather in Cheryl Duval's cap. For all you Doctor Who fans out there -- give yourself a treat and order a copy of this magnificent zine! If we DW fans want to have the same wellspring of creativity that ST fanzines have, we must support our DW zines, especially a labor of love like this one. [3] 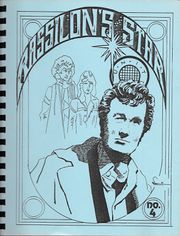 From a July 1993 ad in GAZ: "Big, splashy new issue of an old favorite, dedicated to the 4th Doctor and his companion, Harry Sullivan- though the other companions appear en force, too. Lots of fun, featuring first rate DW stories and art. Worth it alone for the Christ Cook cartoon adventure."

Rassilon's Star Christmas Card Special was published in 1984 and contains 79 pages. The covers are by Jane Fancher and Gail Bennett. It includes songs, recipes, holiday fiction, vignettes, and artwork.

From a submission request in Universal Translator #23:

... a special edition of 'Rassilon's Star' focusing on Christmas themes. Contributors so far are Bennett, Duval, Hoffman, Richie, and Sarick. Especially looking for full-page Christmas art and would like at least one Santa Claus story. Due Christmas '84.

The latest issue of one of the most attractive Doctor Who zines around. The editor is an artist and writer and it shows in her outstanding choice of contributing artists, each with a distinctive style. As the names says, this special issue features Yuletide tales with the good Doctor and friends. There's Romana learning the true spirit of the season, the Doctor and Sarah Jane on a sleighride with less fortunate children, crossovers with Santa, Frosty, and the Phoenix; and two very special tales of the Nativity. All this plus poems, cartoon,s and a collection of traditional Christmas carols with a accompanying illos of the Doctor in appropriate settings. [4]

Rassilon's Star: The Gothen is three stories written by Mary Wisnmer and was published in 1986.

From the publisher: "Three tales of Terror from E-Space. What is the secret of Romana's new companion? And how does the Doctor make his way back from E-Space?" [5]