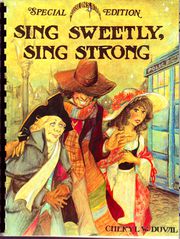 It was to have a sequel called "To Cage a Songbird" that was never published and meant to be part of a trilogy.

From a July 1993 ad in GAZ: "The Doctor and Sarah are caught up in a terrifying race against time and history as they try to stop the disaster they themselves may have caused- the assassination of Wolfgang Amadeus Mozart. A riveting, moving, and often frightening story, full of twists and surprises. Only a very few copies left with the color cover. Mozart Bicentennnial Edition."

.. for transcending fannish boundaries, in this case a story involving Doctor Who and Amadeus that will entertain and amuse people who have little or no interest in either. Some of author/illustrator Cheryl Duvall's historical and musical comments come off as rather more visible than she probably intended (warning to all fan writers: beware of letting Mr. Didacticism in the door, 'cause he'll leave his big old footprints all over your nice clean rug), and her 'toony illos may not work for everyone, but what the hell, y'know? [1]