From Fanlore
(Redirected from Off-Centaur Publications)
Jump to: navigation, search

Off Centaur was the first commercial filk label, founded in 1980 by Teri Lee, Jordin Kare and Catherine Cook. Off Centaur produced high quality recordings and songbooks of some of filk's best performers and writers. Two of these publications were The Westerfilk Collection. and the Bayfilk Songbook.

Following disputes among the partners, the company was dissolved in 1987. Some of the partners formed a new company many of the same performers went on to record music for Firebird Arts and Music.

Many of the songs on Off Centaur's albums won Pegasus Awards. Because of copyright issues, most of the albums cannot be re-released, although several have been almost re-created by the same performers, and many of the songs appear on other albums.

A bit about their catalog of works:

Off Centaur’s high point was the cassette and accompanying songbook Minus Ten and Counting: Songs of the Space Age, released in 1983. They issued 2500 cassettes, and all were sold. This was one of the first filk albums that paid attention to all the legalities when reusing existing tunes, getting permission where it was needed. The climate of the music publishing world in the eighties made it easier than it would have been today....In addition to publishing recordings and songbooks, Off Centaur sold flk and non-flk products produced elsewhere, with artists such as Stan Rogers, Malvina Reynolds, and Tom Lehrer....

...on January 28, 1986, the tragic destruction of the space shuttle Challenger hit filkers, who love space exploration, very hard. Off Centaur released a tape, Challenger Memorial, with songs by multiple composers and performers....

...While Off Centaur focused on studio recordings, it used some sophisticated methods for convention recording. At Chicon IV in 1982, a shotgun mike captured whoever in the circle was singing with very little background noise....[2]

About their shut down and why most of their catalog was never released onto CD:

Putting together a fannish business isn’t easy. Operating on friendship and high ideals can lead to overlooking serious problems until it’s too late, and it can make the problems twice as painful when they’re discovered. Throw in the fact that many fans, like the protagonist of “Wind from Rainbow’s End,” have limited social skills, and it can all go very wrong.

Without digging up all the old skeletons, let’s just say that conflicts arose among the partnership and their associates, and accusations were made. In 1987, some of the principals tried to re-create the business as Off Centaur, Inc., but failed to reach new agreements with many of the artists. Off Centaur Publications broke up acrimoniously in 1988, and Andrea Mitchell fled a lawsuit in late 1989 against Jordin Kare and Cathy Cook-MacDonald. The conflicts took on a wider personal dimension that threatened to tear the West Coast filk community apart.

It wasn’t until 1992 that the legal disputes were settled and the partnership formally dissolved. Teri Lee, Andrea Mitchell, and others picked up some of the pieces as Firebird Arts and Music, Inc., which still exists. Firebird moved to Oregon in 1990. Many of Off Centaur’s releases remain out of print, their copyright situation hopelessly entangled.[3]

Off Centaur had a recording studio in El Cerrito, California. Jeff Rogers was one of the sound engineers.

Albums released by Off Centaur included The Horse-Tamer's Daughter, Minus Ten and Counting, and A Wolfrider's Reflections, along with lyricbooks with complete music. It also released Captain Jack and the Mermaid by Meg Davis, Time Winds Tavern, Quarks & Quests, Murder, Mystery and Mayhem, the first collection of filksongs based on Mercedes Lackey's books, and Where No Man...—a collection of Star Trek filk songs.

This publisher had a newsletter called "Centaur Notes." It was mainly promotional. 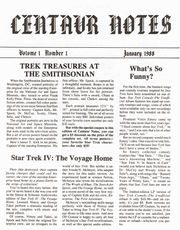 cover of a January 1988 issue of "Centaur Notes"