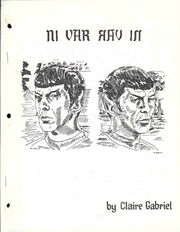 It was first published in the zine Quartet #1, later in Star Trek: The New Voyages, and then online.

Quartet #3 published the first draft of "The Thousandth Man", which had been written in 1975. It's subtitled "Spock meets Spock."

Differences Between the "New Voyages" and the Zine Version

The pro book's editors, Sondra Marshak and Myrna Culbreath, had a history of revising stories, often to their detriment. In a letter to Interstat #113 in March 1987, Gabriel referred to the version in the pro book as "heavily edited." A fan in 2009 wrote:

The scene in Ni Var between the two Spocks during the diplomatic mission was added to the story by Marshak and Culbreath, despite the fact that the story had to be cut drastically to meet the anthology's wordcount requirements. [1]

I'm reviewing this one because the original version differs in several respects from that printed in 'New Voyages'. The first part is the same in principle, though longer and much more detailed, and in the original, before beaming up, Kirk warns Spock to be careful - "You aren't immune to that thing...". And Exar's wife tells Spock specifically, "The answer to the question you asked is on the tape you carried ...to your ship". She is not left alone, "a ship of her own race on its way" — the Exeter is in the neighbourhood, and arrives just as the Enterprise leaves.

In this version, it is Scotty who discovers about the 'twinning' but promises Spock to say nothing - until Kirk, by a chance word to him, stumbles on the truth. That is when Kirk goes to Spock's cabin and faces the "Human" Spock. The landing while they are en route to the Starbase is different; there is no exchange between the two Spocks at that point, although the actions they take are the same. Kirk's subsequent exchange with the two Spocks is differently orientated. The Human Spock has an exchange with Scotty before they try to 'rejoin'; that section is also longer.

The version in 'New Voyages' is more compact, the original has, perhaps, more feeling between more of the characters as well as being more detailed; it has Spock/Scotty relationship as well as Kirk/Spock, Spock/McCoy, Kirk/McCoy, while the New Voyages version is more specifically the relationship between Kirk end Spock. Much of the text is exact (though not all) - the shortening is mostly deletion.

I would be pushed to say which is the better version. Both are good; it's worth reading the first version if you can get hold of it. I think the original is better towards the end; the 'New Voyages' version tends - for me - to be almost too condensed for things to be clear, and the exchange between Spock and Scotty is

excellent. Also it seems more logical fo rScotty to 'smell a rat'- it's bound to have been reported to him that a second Spock beamed up. [2]

Reactions and Reviews: The Story in "Star Trek: The New Voyages"

Ni Var by Claire Gabriel is one of those which has been printed before. I hadn't read it although I'd read a lot about how good it was. On the first reading, I was slightly disappointed, but on rereading it a couple of times I found it had grown on me, and I would in fact agree that it is extremely good. [3]

Another story is Ni Var, the parallel of The Enemy Within. Only this time it's Spock who's divided into his Vulcan and human halves, no less. And of course neither half can survive without the other. The only redeeming parts of the story are a few titillating bits such as Spock smiling and shicking the entire bridge crew. All in all, it was a sweet, mushy little story reminiscent of a Harlequin romance. The introduction is by Leonard Nimoy. [4]

Ni Var by Claire Gabriel charts the problems caused when the two halves of Spock are deliberately separated by a slightly deranged scientist. There are echoes of similar stories; I found myself recalling James Blish's Spock Must Die beside the rather obvious The Enemy Within {to which reference is made) and Datalore, but the resolution of the problem is brilliantly handled. And, much to my surprise, it has a stardate. Also the story is beautifully set up by a modest introduction by Leonard Nimoy. [5]

Well, for starters, it’s nice to have an introduction by Leonard Nimoy, which tries to explain Spock's duality and just further messes up the issue.

Here, Spock is separated in two by a crazy scientist (oh god, the clichés!), and as you might have guessed, one is totally logical by his Vulcan side, and the other is emotional, by his duh!-you-know-what side. The story then tries to examine how each Spock react and delve into his thoughts and feelings… ugh… banal and overdone… [6]

Okay, this one is pretty slashy. Spock is divided into two versions of himself in a way reminiscent of "The Enemy Within" – only this time the division is along species lines, with the result being a human Spock and a Vulcan Spock. Slash-wise, there's nothing overt, although Spock does mention the L-word, but it takes the usual subtext from the show and heightens it. You can read this as a short story about Jim and Spock's friendship, but it's extremely easy to read more into it as well. Hell, to me it's kinda blatant :D [7]

From time to time I must sort through and organize my collection of zines and other Star Trek memorabilia lest this grand obsession of ours threatens to sweep me away, but it ended as most of my efforts in this direction do…tucked up in a comfortable chair rereading an old favorite.

The New Voyages was the first, I believe, of the collected works of fanzine writers to be professionally published. Other collections have since come out and can be found in any bookstore, but I haven’t seen a copy of this one for years. (The 12th printing was dated August 1985.) Sondra Marshak and Myrna Culbreath—names that I’m sure are familiar to fans who have been around since the early days—collected and presented some of the best fan fiction authors to a fan base desperate to keep Star Trek alive when little or nothing was being produced or even conceived. “Ni Var” is a wonderful example of early ST creativity. As Leonard says in his introduction to the story: “I am reliably informed that Ni Var is a Vulcan term dealing with the duality of things: two who are one, two diversities that are a unity, two halves that come together to make a whole.”[8] And while it’s been used to describe Kirk and Spock’s relationship, in this gen story it’s reserved to describe the two parts of Spock’s divided heritage. The Enterprise has been sent to Fornax II, to pick up a sealed tape from a scientist who has been engaged in some highly dubious research. Kirk and Spock have gone planetside to meet with the scientist, Dr. Exar, a native of Fornax I, and his Andorian wife. While there, they find that where computer data says the pair has one child, they now find two, both sharing a combination of the physical attributes of the two races of their parents. The combination of traits turned out to be inherently unstable; their child was dying. Dr. Exar’s solution was to develop a machine that split his son’s personality into two separate people—both looking the same outwardly yet one has Andorian cultural traits, one Fornaxian ones. The scientist himself is dying and so hoped to have a second subject. When Kirk is called back to the ship, he gets his chance. Two Spocks beam back aboard—one completely human, one completely Vulcan. Though the two men take care not to be seen together, Kirk to his credit, sees through to Vulcan Spock’s pain almost at once. As difficult as it was for Kirk to adjust to being split in two, Spock’s problem is even more so. Spock has fused the two halves of his personality together more or less successfully, has made them live with each other because as he has said, his intellect rules over both, but these are two distinct people who look at the universe in truly distinct and sometimes completely contradictory ways. Human Spock, that personality that exists in the glint of Spock’s eye, in his dry wit and often perverse sense of humor, is too easily hurt. Vulcan Spock has achieved his life’s ambition of totally repressing his emotions, yet finds no outlet for expressing anything of his softer side. The two Spocks must devise ways of coping that satisfy both. Finally Kirk confronts human Spock in his cabin and vows to help in any way he can. When he returns to the bridge, he has a whispered conversation with Vulcan Spock at his station—quote: “I haven’t heard a word he said,” he said very softly, knowing that Spock would remember the one other time he had made that promise. “You have my word, Mr. Spock.” “I did not require you to give your word on that occasion, Captain. Nor shall I require it now,” After a moment, Kirk returned to his command chair, deeply shamed that, until now, he had believed that the only Spock who was his friend was the Human one.

Lots of other early well-known Star Trek writers such as Jennifer Guttridge, Ruth Berman, Juanita Ericson, etc. are represented in New Voyages as well. A member of the cast introduces each story, and it’s quite interesting to read between the lines to the realization of the passionate creativity they have unleashed. [9]

Reactions and Reviews: The Online Story

These stories are the absolute tops of any fanfic anywhere.... Ni Var was among the very first [Star Trek] stories I ever read; I suppose it's not inaccurate to say you're at least partially responsible for my twenty year on-and-off-again obsession [with the genre]. A heartfelt thank you." K.S. [10]

I was looking up authors I had enjoyed and remembered your story Ni Var. I think I compared all the other sites I dared look into to the beauty of your stories. There are many good authors on the web, but your stories are my favorites." - R.L. [11]

I was thumbing through my much tattered and beloved copy of 'Star Trek, The New Voyages' last night and stumbled onto 'Ni Var'.... It was always my favorite story in that book, and re-reading it, I was again impressed by your characterizations." - M.W. [12]

I assume you are the same Claire Gabriel who wrote Ni Var. It was the first Star Trek story that I ever read, and left me very hungry for more." - E.M. [13]