Magog83 is a notable fan, fanfiction writer, vidder and archivist.

As listed on her various profiles, Sally has taken part in the following fandoms:

Sally was active as a writer in Merlin fandom from 2009 to 2011. She wrote 25 stories, all Arthur/Merlin, including The Route to Advancement Series.

Many of her stories have been made into podfic.[1] Podficcer lunchee recorded at least ten, including the first part of the Meeting the Minister series and The Route to Advancement Series, which was repodded in 2014 by kalakirya.

At the time of writing, Sally is most active in Radio 1 RPF-Nick Grimshaw fandom as the creator of near-daily clips of the best of the Breakfast Show links.

Sally was an early supporter of "Grimmy" as the new host of the BBC Radio 1 Breakfast Show, having followed him from his night-time slot on the same station.

The clips are carefully cropped, dated, tagged with any notable participants or objects of discussion, and uploaded to her Tumblr, to Youtube, Soundcloud or other platforms (depending on length and occasional copyright claims) along with a relevant image and short, often humorous summary. They are found under the Breakfast Show tag.

She has also created a number of audio compilations of the best of the Breakfast show, which tend to reflect her fondness for former Breakfast Show producer Matt Fincham. Examples:

Sally also created a primer to the show: Sally's Overlong Guide to the Radio 1 Breakfast Show Team :), posted to her Livejournal April 2nd, 2013. 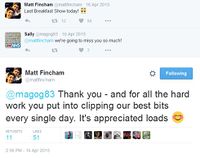 "@magog83 Thank you - and for all the hard work you put into clipping our best bits every single day. It's appreciated loads :)"

In a fandom-typical break of the Fourth Wall, Sally's archiving work was acknowledged by Matt Fincham himself on Twitter.

The reactions to stupidgorgeousbritishboys's Tumblr post screencapping Matt's reply exemplify how valued Sally's work is to many fen. Various members of the fandom reblogged the post, using tags such as:

The archive also serves as inspiration and reference for a number of fanworks. See for example the writer's notes to pod_together project You and I and No One Else by hllangel and greedydancer:

While technically I wrote it and she read it, there’s a lot more collaboration behind the scenes. We brainstormed together to come up with the idea, passed pieces back and forth to edit while I wrote, and spent a lot of time listening to audio clips to find exactly the right ones. (so many thanks to magog83 for her vast archive. You are a gift to this fandom.)

In 2015, she became active as a supporter of the BBC in the #BacktheBBC campaign.[5]