You may be looking for Ultra, a slash Blake's 7 zine. 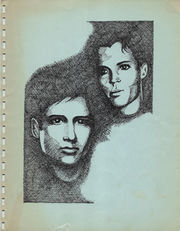 M/K Ultra was published in 1998. It is a 106-page Mulder/Krycek slash anthology featuring stories from the net by Sugar Rush. Poetry by Cody Nelson. Artwork by Cody Nelson & Randym.

From the online flyer: "TRUTH IN ADVERTISING: The stories in this zine - but not the poetry and artwork - have all been previously published on the Internet. They have been substantially revised and expanded for print publication.

PUBLICATION DATE: May 22, 1998, Memorial Day Weekend. Will debut at MediaWestCon 18.

OBLIGATORY WARNING: This is an adult X-Files zine with explicit depictions of m/m sex. Not for sale to anyone under the age of 18. AGE STATEMENT REQUIRED."

Two song lyrics by Sarah McLachlan are included and credited.

A very brief word, I promise! I'm sure you want to get to the juicy stuff asap, and who can blame you??

Well, as one of those '60's rock icons used to sing, what a long, strange trip it's been. Only a few short months ago I was an unsuspecting die-hard 'shipper. The very notion of slash got my 'squick' reflex flexing something awful. And then I went to MountainMedia Con...

And something really weird came over me -- maybe it was that Colorado mountain air, but next thing I knew, I was subscribed to three different slash mailing lists, and I'd posted my first Mulder/Krycek slash story. The feedback started rolling in, and that was it. One more shipper corrupted to the other side.

Not that I'm complaining, mind you. In fact, I still consider myself a shipper as well as a slasher, although some might say the two are inherently incompatible. Oh, well. I've always gone against the grain.

Truth in advertising: all stories -- but not the poetry and artwork -- contained in this zine have been previously published on the Internet. The versions published here, how ever, have been substantially revised and expanded.

Last but not least: heartfelt thanks to Leigh, Cody, Carol, Margaret, Ria, Anna, Maria, Tina and all the wonderful denizens of the Mulder/Krycek Romantics Association. Your support and encouragement have brought me so far. And special thanks to JoAnn, for helping these stories see print publication.

And to Don, for everything. Love forever. And now, on to the stories!!

P.S. -- If you're on the Internet, feedback may be addressed to: [email address redacted]