Liberation Letters was a quarterly letterzine for Blake's 7.

The fan club that published this letterzine also published Liberation, a newsletter. 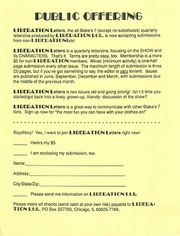 A 1991 fan comment: "There is one other general B7 letterzine, attached to Liberation, Ltd. in Chicago, which has just opened up to the fandom in general. Cost is $5 a year for non-members of Liberation, $3 for members and comes out quarterly." [1]

A 1992 ad in FanGuide said it was "accepting letters from non-members" which makes this publication sound like an apazine, but the ad also specifically called it a letterzine.

Liberation Letters, the all Blake's 7 (accept no substitutes) quarterly letterzine produced by Liberation Ltd. is now accepting submissions from non-Liberationists! Liberation Letters is a quarterly letterzine, focusing on the SHOW and its CHARACTERS. That's it. Terms are pretty easy, too. membership is a mere $5 for non-Liberation members. Minac (minimum activity) is one-half page submission every other issue. The maximum length of submission is three (3) pages, but if you've got something to say, the editor is very lenient. Issues are published in June, September, December, and March, with submissions due the middle of the previous month. Liberation Letters is two issues old and going strong! Isn't it time you started/got back into a lively, grown-up friendly discussion of the show?

Liberation Letters is a great way to communicate with other Blake's 7 fans. Sign up now for "the most fun you can have with your clothes on!"