Dandruff Droppings is a gen, slash and adult het apazine of the Flakey Blakey Society.

It was "The Blake's 7 Fanzine Which Is A Hair Better Than Any Other."

"A subscription runs $18 a year, subscribers are asked to commit to submissions (fiction, poetry, analysis, essays, art, LOCs) during a subscription year, it contains adult material, submissions should be accompanied by SASE. [1]

Dandruff Droppings v.2 no.3 was published in March 1992 and contains 8 pages. 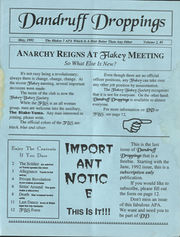 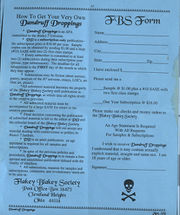 as of this issue, subscriptions were required: this is the form to fill out

It's not easy being a revolutionary; always there is change, change, change. At the recent Flakey meeting, several important decisions were made:

The name of the club is now Flakey Blakey Society.

While the FBSis an all woman group, men are welcome into the auxiliary, The Blake-Yums. Any man interested in joining, please write.

The official colors of the FBS are: black, blue, and silver.

Even though there are no official officer positions, any Flakey can take over any other job positions by assignation.

The Flakey Blakey Society recognizes that it is not for everyone. On the other hand, Dandruff Droppings is available to almost everyone.

This is the last issue of Dandruff Droppings that is a freebie. Starting with the June 1992 issue, this is a subscription' only publication. If you would like to subscribe, please fallout the form on page 12. Don't miss an issue of this fabulous APA. We want and need you to be part of DD.

Dandruff Droppings v.2 no.11 was published in November 1992.

Dandruff Droppings v.2 no.12 was published in December 1992.