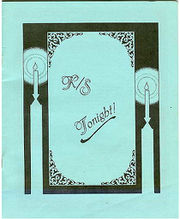 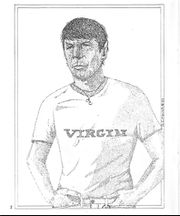 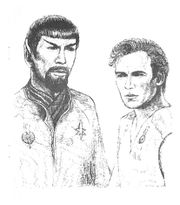 Welcome to the first issue of K/S TONIGHT! I hope to have this mini-zine available on NTS' "off" months mainly because we all need MORE K/S to read and also to help me keep my sanity when production deadlines come around. Speaking of deadlines... if any interested writers, poets, or artists would like to contribute, please do!! I am already planning issue two which will be out the beginning of June; issue three is due in August. I especially need fiction contributions—any length. Artists, please contact me for more specific information. Readers, if you would like to send LOCs, I will print as many as I can on a space available basis. Please remember to keep your criticisms on a constructive level. About this first issue... I realize the artwork (illos) is almost non-existent, although Barbara G. and Ann's reprint saved that part from complete oblivion (many thanks!), which was due to getting TWIN DESTINY to the printer and finishing the latest edition of NTS. However, while I intend to keep the covers free of explicit illos — in case you want to carry and read the zine on the bus or at work — I do have plans for the inside back cover and, of course, for centerfolds that you can remove if you wish. That will be coming up in issue two. Beginning with the poem below, the three pieces by Vivian Gates are dedicated to Ann Crouch for they were inspired by Ann's "Virgin" T-shirt illo of Spock which was originally printed in TWIN DESTINY #1 and is reprinted here (with Ann's permission).

As a silent consumer of K/S for over 5 years, the topic for this issue of NTS's Observation Deck has moved me to write this review of K/S TONIGHT almost as a response to the question "Are the zines you're reading now what you want?" In a word, this fan is not getting what she wants; K/S TONIGHT highlights the reasons why. Ostensibly, K/S TONIGHT is billed as a bi-monthly fiction supplement to NTS. Based on the ads, I assumed it would involve at least some of the staff of NTS & while not comparable, would be of the same general caliber of NTS. Such was not the case. The only NTS person involved (beyond artists) was the "editor" Linda Biggs. Despite what I considered somewhat misleading advertising, I read the zine & was disappointed with its content. What upset me most was not the generally poor quality of the material (although, it did not please me) but the lack of editing, typically one of the chief problems present in many zines today. I found myself thinking that truth in advertising should be extended to publishers who call themselves editors. If this material WAS edited, then Biggs would do well to find herself a ghost editor.

Technically, K/S TONIGHT is fine. It's interior graphics & layout are pleasing. The print quality & size was certainly okay. Typos were infrequent. The plain, take-on-the-bus cover with its candles for supposed late night reading is clever. Art Is generally absent, there being only border work & 3 illos in the zine. One illo is the inspired Ann Crouch "Virgin" Spock originally printed in TWIN DESTINY I. There is a small Caro Hedge unicorn with a cock for a horn that is cute. The third illo is a Barbara Gordon, mirror universe Kirk & Spock drawn in her usual out-of-perspective style.

The poetry in the zine is its best feature although It ranges greatly in quality from evocative to trite. Unicorn Bait by Vivian Gates & another, untitled, by her, both inspired by the Ann Crouch illo are cute, evoking a smile from the reader (which is much more than can be said of her story, similarly inspired). Loving Thoughts... ln Transit - If you enjoy the Harlequin version of K/S, then this poem by "Kirk" will thrill you. I find her dialogue effusive & overdone which is unfortunate because the concept the language is attempting to convey is a good, solid idea, a sweet romantic notion even, that gets lost in the flowery flow of syllables. Rain by PATT is my choice for best poem, best piece in the zine. Simple, everyday words effectively create a gentle yet vivid image & feeling in the reader, evoking that sense of love Kirk & Spock have for one another & that we have for them. Accepted Definitions by Lyon is an interesting poem that on first reading left me with a distinct sense of neutrality; it was okay, A second & third reading, however, made me realize that I liked the tone of the piece which captured Spock rather well. The accompanying border illo of two interlocked IDIC symbols by Caro Hedge was lovely. Questions & Answers by Robin Hood were rather trite in their cliched imagery & too melodramatic. Both deal with Omicron Ceti III. In the first, Kirk confesses that he can't possibly continue on without Spock & further, he doesn't care about anything else, a premise I find rather unacceptable for the Kirk who continually worries about his ship & its crew. The accompanying piece was not as histrionic but the author lost my attention when she refers to Kirk as the "thing" missing from Spock's life. If a poet can find no better word to use than thing, then the poet ought to consider another type of writing. Peace by Noelle Harrison Is a lovely idea, well executed with simple, effective sentences , The piece is greatly harmed, however, by the author's use of endearments unbecoming any but Barbara Cartland characters. I find it impossible to picture Kirk saying into a pointed ear, "Good night, my love." or Spock whispering into the night, "Sweet dreams, t'hy'la." or maybe it's the other way around.

As a personal comment I found the review by [M W] on K/S TONIGHT [in Not Tonight Spock! #9] to be very harsh, & I also considered it unfair. From the ads, I understood KST to be an inexpensive 'zine' with the type of short stories which are often found included in other l/z's but having them under a separate cover. I thought - & still think the idea was excellent & that the finished produce WAS value for money. Rarely have I disagreed so much with a review & this is the first time I have ever felt the need to reply to a review. Don't get me wrong, KST was not perfect, but I would have expected many of the minor problems to have been ironed out in time, & I feel that the loss of KST deprives writers of a showcase for shorter stories & readers of an inexpensive & reasonable zine. [2]