I-Con is a long-running science fiction convention. The scope of the con now includes many other areas of fannish interest, including anime, comics, furry, gaming, and SCA. See Wikipedia.

I-CON began in 1982 when three campus clubs combined their forces (The forum, COCA (Committee on Cinemagraphic Arts), and SAB Speakers (Student Activity Board)). I-CON's first guest was Gene Roddenberry. Forum had attempted to run 3 other cons in the past but all failed they were known as SunyCon (one day one shot in student union), MudCon (3 days long but hosted in a hotel), and BrookCon (3-day event on campus but was a financial failure). 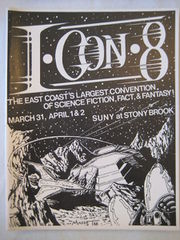 Recently a friend and I had the opportunity to attend I-Con 9 in Long Island, New York. Despite the fact that it was being billed as "The East Coast's Largest Convention of Science Fiction, Fact, and Fantasy", this was not the only reason to drive 12 hours to the North Shore. Elice, my friend, is getting married in September in NY and this gave us a chance to go up and buy the dress and at the same time do some conventioning. This was Elice's first Con so I looked forward to introducing her to the wild and strange world of fandom. I-Con (Island Convention) is an annual convention held at Stoney Brook University in Long Island. This year it was held on March 30 through April 1. Tickets were $20 for a three-day pass, $10, $15, and $12 for the three separate days of the Con. The majority of the Con was held in the Javits Lecture Center while other events such as gaming and the art show were in the student union. Organizers said that 3,500 people attended last year's convention and they expected more this year. We arrived at the convention bright and early and ended up standing outside for a half hour. Finally, we got inside and I immediately located a friend from Ohio that I went to high school and college with. He told us we just missed Richard Arnold's presentation about the behind the scenes news from the Star Trek set. Richard Arnold is the Research Consultant for Paramount Studios. Fortunately, we were in time for John De Lancie (Q) to hit the stage, so we fought our way (this would turn out to be common occurrence as the Con wore on) into the lecture hall. John turned out to be just like the character he portrays on Star Trek. When I got to talk to him later backstage, he was very cocky and sarcastic. I had the chance to meet up with Richard again. We had met a year ago in Indianapolis and had kept in touch through my friend in Ohio. Richard was very gracious and arranged for my friend Jozsef (from Ohio) and I to get guest passes so we could wander at will. The convention center was by far too small for the crowds they were expecting. It seemed like a few fire codes were being broken that weekend. There were two dealer rooms that were jammed packed with goodies but again the crowds made these excursions qualify for hazard pay. The prices in the dealer rooms were not bad. One note -- never have dealers out in the hallways where traffic from other events is going to collide with buyers. Programming at the Con included comics, art, science and technology, fantasy, film and electronic media, and fandom. There were 12 to 15 events going on simultaneously at this Con. Guests that attended include astronaut Scott Carpenter, authors Robert Bloch, C.J. Cherryh, and Alan Dean Foster, garners Steve Jackson and E. Gary Gygax, Marina Sirtis and John De Lancie from Star Trek: The Next Generation, and Sylvester McCoy, the current Doctor Who. Jonathan Frakes was slated to appear but family obligations prevented him from showing up. Elice and I were really disappointed about this. We got to see Marina Sirtis on stage later in the day. She was very funny and delighted the audience with her anecdotes about backstage antics on the set. When I talked with her later she appeared tired but still took the time to talk with each of her fans and sign autographs. Marina, by far, had the largest crowds gathered to meet her. This convention had so many activities going on that it was too bad that it didn't last for a whole week. That's about how long it would take to fit in everything I wanted to do. I was really disappointed that I didn't get to see a Soviet film called "Solaris". It has been called their version of "2001: A Space Odyssey". Aside from the multitude of films being shown, there were 110 guest speakers planned to appear, panels on topics from science and technology to comics and gaming, and workshops with SF writers, editors, actors, and directors. Overall, I-Con 9 was pretty good as far as cons go. The organizers really need to find a larger area to hold the event; the crowds were unbearable. The wide variety of speakers and panels was pleasing. The dealer rooms could have been larger and spaced better. If I am closer next year, I might consider going again. [1] 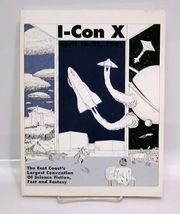 This year's ICON at SUNY at Stony Brook was a disaster. Apparently, they weren't sure that there would be a con until a few months prior to ICON. As a result, they couldn't get the usual locations. The previous year's ICON had lost a lot of money.

The programming at ICON was always very varied. There was something for absolutely every interest. This year, the programming was much more limited and there was much more confusion as to what was going on. IMHO the science tracks suffered disproportionately.

Well I-Con XVI is over and I am JUST starting to feel better, I got a touch of the flu after getting back, but now I am ready to give a synopsis of the weekend. The con was a 3-dayer, with programming from Friday at 6pm through Sunday till 9pm. Cost was a reasonable $30 for the weekend. Held at the University at Stony Brook on Long Island...

First on the agenda was a sweep of the dealer's room, main stage and art display. The dealer's room took up 80 percent of the main floor with 100 different dealers, the main stage was separated from the dealer's area and set up so that seating was in a set of the bleachers. ( THE best way I've ever seen main stage seating done. No one blocked anybody's view of the stage. Put this in your "If I do a con" manual. KUDOS to I-Con for that idea.)

After the dealer's room decided to head towards the panel building to the first of several B-5 Panels. First panel discussion was on the reality versus fantasy of the science of the B-5 universe. Next on the list was the indomitable JMS himself. Unfortunately no new news on season 5, but he did confirm the TNT purchase of seasons 1-4 and the TV Movie slated for next January. The highlight of JMS's presentation was the sneak peek at scenes from the next several episodes. By the time this report gets released you'll have already seen what happened between Sheridan and Garabaldi, Sheridan and Delenn, Sheridan and the Ambassadors, Sheridan and ...

The hint being that Sheridan is going to 3o a little batty and we start to wonder if brush. or should I collision with death, and resurrection have had some effect on his mental state. Also shown were the 3' and 4'h season blooper tapes, a must have if you can find them. A Pakmara doing the Macharana is a something you don't see every day. After a bite to eat was a panel with JMS. Harlan Ellison, Michael O'hara, Peter David, John Peel and a NYC TV Critic, topic of the panel was 'What is wrong with TV Executives today?" As you can imagine with this group on stage there were some pretty undisguised hostilities. But there was some insight into the workings of Television production.

Next was a hike back to the athletic center to wait in the autograph line. The design of the center was used to make the normal cramped waiting a little bit easier. If you can imagine an athletic center with a main floor and a raised 5 ft. walkway encircling the whole way around giving a full view of the main floor, this is where the I-Con committee put the autograph line. While there I got to see Rene Auberjonois speak, for the first time since Raleigh.

Having run into some of the crew of the USS Endeavor earlier. I met up with them and transport us to the con hotel. Since there was nothing else going on that I wanted to see back at the con, I checked into the hotel, grabbed some dinner and took a shower and nap to wait for the parry later on.

The con committee rented one of the lounges for the Masquerade Ball so we had the whole room to ourselves and for once, the DJ didn't make eardrums bleed. The bar was serving up Romulan Ale, which was overpriced, but all in all it was an enjoyable evening/morning. I dragged myself out of bed Sunday morning and headed back to the USB campus. Harlan Ellison was autographing when I got there, so I got in line for another round of autographs. I got JMS(2). Michael(2), Rene and Harlen(2) autographs suring the con. Back at the athletic center 1 sal in on a rather weak assortment of auction items, before Michael O'hara came on stage. Michael had been suffering from a bad flu bug all that weekend and he was a real trooper to not cancel, but you could see that he was tired. If you've nor seen Michael before, he is by nature is a rather shy stage, I did one last sweep of the dealer's room, said goodbye and made my way back to Orient Point to catch the return ferry back to New London.

Other than catching a bad cold after returning, I'd give I-Con a big endorsement. [3]