Gay or European is a meme where a group discusses whether the character is gay, or just European, in chorusing, they twelvem "Is he gay, or European?" and "There! Right there!" as they analyze his behavior. Eventually the man's boyfriend or another person speaks up and reveals that he is both gay and European. It is commonly referenced in vids or animatics, but the text alone is also recognizable.

The original song, titled "There Right There", originates from the 2007 Broadway musical adaptation of the 2001 comedy movie Legally Blonde. Within the song, a group of lawyers are seen discussing the whether or not the witness is indeed gay, or just European. The original audio of the musical number was first uploaded to YouTube on November 25, 2007, and has since gained over 600,000 views as of May 2016.

According to the Gay or European page of the Know Your Meme website[1], this meme has a series of of anime music video (AMV) parodies featuring edited clips from various anime and cartoons and "There Right There," a song from the musical adaptation of 2001 American comedy film Legally Blonde, in which one character speculates on the sexual orientation of another character. On YouTube, the song has gained popularity within the AMV community as fodder for audio-dubbed remixes.

The earliest known parody of the song was first uploaded on March 14, 2008, by YouTuber Anavrin2005[2], featuring the character of Tamaki Suoh from the anime series Ouran Highschool Host Club, gaining over 700,000 views as of May 2016. A second parody was later uploaded on February 18, 2009 by Youtuber monkeypants06[3], instead featuring the character of Klavier Gavin from the Phoenix Wright: Ace Attorney series. As of May 2016, the video has over 200,000 views. 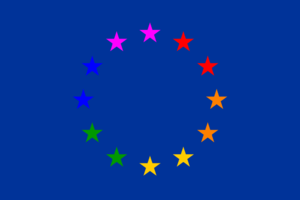 Gay or European flag from Know Your Meme