From Fanlore
(Redirected from Flounce)
Jump to navigation Jump to search

A fandom flounce is a dramatic exit from a community, mailing list, or a fandom (or even fandom in general), usually happening in the wake of a kerfuffle, a flame war or in response to undesired/negative feedback. A flounce usually takes the form of an announcement that the fan will quit all communities, never write again, and even to delete or f-lock all their fanworks.

In some respects the fandom flounce can be seen as the milder, saner cousin of the online pseuicide, only one that does not necessarily involve sockpuppets.

Some fans have been known to flounce repeatedly, or to employ it as their usual method of leaving a fandom.

Flouncing may be a reaction out of genuine hurt sometimes, but is often a drama ploy to garner sympathy and messages of support that beg the fan not to leave. Their friends and admirers declare that they loved their fanfic, unlike the rude, hurtful previous commenters and so on: "You know the ones. The writer/fan/reader posts a long-winded explanation (a.k.a. "suicide note") why they're leaving... forever (back of hand to forehead)... woe is me -- "and here's how you all should feel really guilty about my departure." Just to make sure the knife is keenly felt, "I shalt take down all my fics and delete my archive." [1]

In "The Flip, the Flail and the Flounce: When Fandom Implodes"[2], a flounce is described thusly:

Then comes the flounce. Dr. Merlin likes to refer to the flounce as the "Yer all bastards!" stage of fandom, though other names may apply as needed. The flounce is accompanied with an exaggerated expression of bitter disappointment, a public refusal to discuss the matter further with the other parties, an even more public final note that one is leaving the fandom, and occasionally (though not always) the deletion/renaming of one's Livejournal or blog. Scarlett O'Hara does not sweep off-screen as dramatically as the fan does when s/he is breaking up with a fandom.

A threat of a fandom flounce can also be an effective strategy to stop or derail a conversation, shifting the focus away from the original topic, which may have been uncomfortable (for example a discussion of racist elements showing in a fanwork) to focus on soothing the upset fan with an outpouring of sympathy to prevent them from leaving, or alternatively mocking the overreaction of flounces and such, but in either case the discussion will devolve into more general wank away from the original topic. 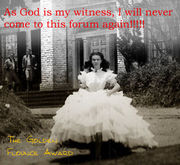 Some people feel that the key defining factor in a flounce is an underlying tone of seeking reassurance:

....some people who state that they are deleting their journals or leaving a message board or forum are not indulging in a dramatic reading of Goodbye Cruel Internets, but really have decided to stop participating in that particular venue. But the difference in tone between the two styles is, at least to the Lady of the Manners, very obvious. People who have decided to move on usually state their decision in terms of “I’ve decided to focus my energies elsewhere”, or “Things are getting busy for me and I don’t have the time to keep up with this”, whereas variations of the Great Flounce-Off include “I don’t think anyone understands what I’m trying to say, so I’m just going to stop posting”, or “It’s obvious that I’m making everyone upset or offending them, so I should stop posting”. One of the tell-tale markers of something from the Goodbye Cruel Internets script is the undercurrent of the person seeking validation or reassurance that they shouldn’t go away. [4]

Note that not everyone agrees on what qualifies as a 'flounce' since one person's flounce may be another person's rallying cry.

A 1997 example: "You're going to hear a lot of things. Truth, lies -- you'll make the decision on that for yourself. But, if you can, just every so often, when it's quiet again, and all there is the fanfic and the thrill of your muse, then if you might, remember me. Goodbye." [5]

In general, fandom views flouncing on par with toddler tantrums: annoying and disruptive. Some fandom communities tag or make lists of note-worthy flounces in an almost celebratory fashion. [9] Other fans point to flouncing as an example of how their fandom community is deteriorating[10] [11] sometimes ignoring the fact that the behavior has existed for decades and stretches across multiple fandoms. Other fans take a more balanced approach:

It seems like every day I see people in my Twitter feed threatening to flounce the fandom for one reason or another. It’s very true the Twi-fandom has more than its share of drama -on many occasions I’ve rolled my eyes so far back in my head I thought they would get stuck. Despite the drama, I haven’t thought about picking up my toys and going home. Why, do you ask? Well, it’s not the books or the movies, although I have enjoyed them. Read on and I’ll tell you why I’m sticking around. The biggest reason I can’t flounce is the many wonderful people in this fandom. Yes, there are some bad apples, but they can be found in any social group. I’ve made more friends than I can count over the last three years. We started out chatting online, then moved on to exchanging cell numbers – I’ve even had the priviledge of meeting many of you in person. The great thing is I continue to meet wonderful people all the time. If I flounced now, who knows what relationships I wouldn’t make? I’ve had too much fun and gained too many awesome friends to bow out now. Friends are one of life’s greatest blessings. We make friendships in the most unexpected ways in this fandom, and there’s no way I would deprive myself of that .[12]