Flight of the Phoinix 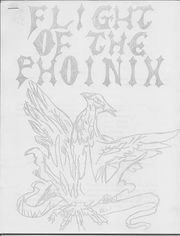 Flight of the Phoinix is a Star Trek: TOS club zine. It contains non-fiction and fiction. This fanzine was printed on one side by mimeograph. The printing is very light purple and is difficult to read in some places.

Flight of the Phoinix v.1 n.1 was published in January 1976 and contains 31 pages. A second printing was issued in March 1976. The front cover is by J. Collins.

This first issue contains commentary by Lisa Wahl on the character of Spock v. the character of Issac Asimov's android, R. Daneel. The rebuttal of Asimov's erroneous conclusion that Spock and Daneel were both popular because of the their similar philosophies was concise and logically-executed, but could have benefitted from more explanation of who Daneel was, so that the arguments could be more readily understood. 'Phoinix' also has an interesting informational ad on Memory Alpha -- its function, duties, and how to submit fanzines for immortality. Anyone who still doesn't know about this ST fanzine archive should contact Sharon Ferraro. The main body of the zine is composed of a three-part novel by Lisa Wahl and Daniel Hough called 'Paradox in Time,' which is concerned with a 20th century woman who invented warp drive fifty years before Zephram Cochran even thought about it. Dr. Corina Larson's one-person ship pulls through a black hole, and is displaced to the Enterprise future, where the doctor creates the paradox mentioned in the title: even though she has the proper communications and enough power, she cannot return to the past, because her existence in the Enterprise's past would alter the Federation present. Although this time-paradox plot has been used unsuccessfully many times in past fanfic, 'Paradox' is definitely worth reading, due to excellent characterizations and several twists in the story. Corina Larson is one of the few intelligent women I've met in fan fiction who does not fall in love with Kirk or Spock (or McCoy, or...). She is dedicated to her scientific studies yet has a warm, human nature and stands alone as a strong character. Unfortunately, some of her strength of will is attributed to Janice Lester-type psychosis. Although the depictions of the regular crew are cursory at best, we are allowed to see a very rare angle of Kirk's personality at the conclusion of the novel. I have only technical criticisms of the zine, although I'm sure the editor has already spotted them: print a table of contents! Also, simpler type-setting would be appreciated because twenty-plus pages of script can become quite tiresome. The advertisements in 'Phoinix,' while very interesting, could be a little more strategically placed, so they do not interfere with the continuity of the fiction. All in all, a good first attempt. The artwork scheduled for the first issue was delayed, and will appear in the next 'Phoinix,' for which editor Mike Warner is now soliciting material. Suggested fiction and artwork topics are: time travel, sf in movies or on television and J.R.R. Tolkien. [1] 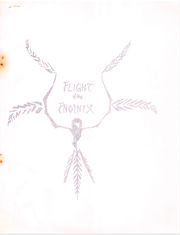 Flight of the Phoinix v.1 n.2 was published in September 1976 and contains three short fiction pieces, poetry, and four articles. It is 14 pages long.

Flight of the Phoinix v.1 n.3 was published in May 1977 and contains one short fiction piece, poetry, and two articles. It is 20 pages long.

Flight of the Phoinix v.2 n.1 was published in June 1978. It contains six articles and is 20 pages long. This was the last issue to be published.