Fantastic Beasts is a series of movies taking place in the Harry Potter universe, which act as a prequel to the original story. The series is set in 1920s New York, marking a departure from the Anglo-centric setting and perspective of the original Harry Potter books and movies, and introducing fans to a different side of the Wizarding World with its own set of customs and norms.

J.K. Rowling, author of the Harry Potter series and screenwriter for the Fantastic Beasts franchise, has confirmed that the series will comprise five movies.[1]

The series consists of the following movies:

In the first Fantastic Beasts film, Johnny Depp made a cameo appearance in the role of dark wizard Gellert Grindelwald at the very end of the film. This casting decision was met with backlash from the fanbase for a variety of reasons:

Following the release of the first film, Fantastic Beasts producer David Heyman justified the decision to cast Depp in the role of Grindelwald in an interview with 'Collider', saying:

“What we wanted was an iconic actor to play Grindelwald, because Grindelwald is an iconic character who has a significant place in this story. His ability to persuade the hearts and minds, to persuade people to follow him is essential to this story.” “...We were looking for someone who was seductive and could be charming and could be original, who was iconic, who was a great actor; and that’s what Johnny Depp is. He can be irresistible. He’s powerful. He’s created some iconic characters, and not made the obvious choices when doing so. The unpredictability of the choices he makes is part of what makes him so extraordinary and that was very exciting for us. He was the perfect choice for Grindelwald.” 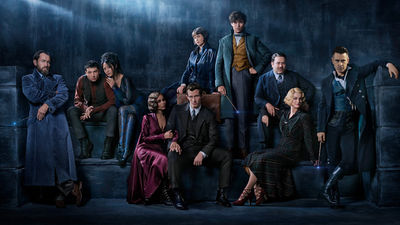 An alternative version of the Crimes of Grindelwald poster, featuring Colin Farrell in the role of Gellert Grindelwald, by Tumblr user ColinFarrellSource

In November 2017, the title of the second Fantastic Beasts film (Fantastic Beasts: The Crimes of Grindelwald) and a promotional image showing Depp in the role of Grindelwald were released, making it clear that Depp would reprise his role as Grindelwald and be a central focus of the second film. Some fans responded by creating variations on the promotional poster which cut Depp out of the image, or replaced him with Colin Farrell.

Facing renewed backlash from the fandom over Depp's continued role in the Fantastic Beasts franchise,[12] Rowling published an official statement to her website which defended her choice of actor to play Grindelwald, while admitting that she had at one time considered recasting the role:

When Johnny Depp was cast as Grindelwald, I thought he’d be wonderful in the role. However, around the time of filming his cameo in the first movie, stories had appeared in the press that deeply concerned me and everyone most closely involved in the franchise.

Harry Potter fans had legitimate questions and concerns about our choice to continue with Johnny Depp in the role. As David Yates, long-time Potter director, has already said, we naturally considered the possibility of recasting. I understand why some have been confused and angry about why that didn’t happen.

The huge, mutually supportive community that has grown up around Harry Potter is one of the greatest joys of my life. For me personally, the inability to speak openly to fans about this issue has been difficult, frustrating and at times painful. However, the agreements that have been put in place to protect the privacy of two people, both of whom have expressed a desire to get on with their lives, must be respected. Based on our understanding of the circumstances, the filmmakers and I are not only comfortable sticking with our original casting, but genuinely happy to have Johnny playing a major character in the movies.[13]

Some fans were satisfied that Rowling had addressed the issue personally and trusted that she had made the right choice by casting Depp. Others, however, found the response evasive and tone-deaf, and believed that it failed to properly acknowledge fans' very legitimate issues with the casting. Rowling was also found to have blocked at least one fan who called her out on Twitter for the hypocrisy in casting an alleged abuser as Grindelwald, when the actor who originally played Vincent Crabbe in the Harry Potter films was let go over drug possession.[14]

On November 6, 2020, Depp announced that he had been asked to resign by Warner Bros. from his role as Grindelwald, following the outcome of a libel case that found the allegations of domestic violence committed by him to be "substantially true".[15][16] Mads Mikkelsen replaces Depp as Grindelwald in the third film, being the 4th actor to have played the role of Grindelwald[17].

In advance of the 2016 release of Fantastic Beasts and Where to Find Them, JK Rowling began releasing information about the wizarding world of North America through Pottermore. The first installment of a four-part essay series entitled History of Magic in North America was published in March 2016; the essay outlined key events in North American wizarding history from the fourteenth to seventeenth centuries. The essay series was met with much criticism from fans and journalists, many of whom identified issues of cultural appropriation, colonialism and Eurocentrism in these worldbuilding efforts; similar criticisms were also made in response to Rowling's account of the founding of Ilvermorny, the North American wizarding school. In particular, Native fans, scholars, and journalists were at the forefront of these ongoing conversations. A post on Tumblr that linked to "a curated list of Native writings on Ilvermorny" was shared over 14,000 times as of April 3, 2018, and conversations continued on a variety of social media platforms, including Twitter and Reddit.[18] The curated list of responses from Native people to Rowling's writings on North American wizarding life was initially published on the American Indians in Children's Literature's blog in March 2016, and updated through October of that year; the list included some media pieces from outlets like Huffington Post and Indian Country Today, as well as many links to Twitter threads and Storify posts.[19]

Both the History of Magic in North America essays and the Ilvermorny materials were understood as part of the worldbuilding for the Fantastic Beasts franchise, and so criticism of these writings often included or incorporated criticisms of the franchise as a whole. Rowling's writings on Pottermore were also accompanied by video trailers published to the Warner Bros. Pictures Youtube account; these trailers were framed as promotional materials for the upcoming Fantastic Beasts film.[20][21]

Many fans had been concerned about Rowling's plans to incorporate "indigenous magic" in the Fantastic Beasts series since at least 2015, when she confirmed on Twitter that this would figure somehow into her story of the North American wizarding school eventually revealed as Ilvermorny.[22] In a 2015 open letter to Rowling, Dr. Adrienne Keene (a Native scholar and the author of the website Native Appropriations) responded to Rowling's tweets: "The problem, Jo (can I call you Jo? I hope so), is that we as Indigenous peoples are constantly situated as fantasy creatures...But we’re not magical creatures, we’re contemporary peoples who are still here, and still practice our spiritual traditions, traditions that are not akin to a completely imaginary wizarding world (as badass as that wizarding world is)."[23]

For more detail on this topic, see the Criticism section of the Ilvermorny Fanlore page.

Several Brazilian fans at the time of the naming of the wizarding school located in the Amazon Rainforest strongly criticized the author's mixing of ethnicities and cultures and the fact that the name of the itself is nothing more than Wizard Castle in Portuguese, written without separation between the words. There were those who staunchly supported the choice and those who staunchly criticized it, in the end the critics were widely persecuted by Rowling's supporters, being split from traitors to the fandom. Other criticisms were also made for fear of Rowling not knowing how to approach different cultures and ethnicities from Latin America, because when creating Castelobruxo she united different peoples that did not speak the same language or follow the same religion, which for many was an affront to the natives.[citation needed]

There were also criticisms of placing a "castle" made in stone referencing the Mayan constructions in the middle of the Amazon rainforest, in order to encompass the teaching of all Latin America, when such type of construction is not common in the area. Also, many fans criticized that Rowling seems to have created this and the other schools only to be able to get more milk out of her golden cow (the Harry Potter franchise) which had already ended, but was in theory restarted with Fantastic Beasts.

Other criticisms were made for the stereotyped way of always presenting Brazil through the states of São Paulo and Rio de Janeiro. Many fans from other locations complained about how this performance of the country by two neighboring states that only show a part of Brazilian culture was wrong. It would be the same as presenting the United States solely by one city, without focusing on the differences that form it and in the rest of the country. Also due to the year the film was presented, there were criticisms about social political issues that could be presented or excluded from the film, in addition to the possibility of not having a national cast besides, by a single white actress of European descent.