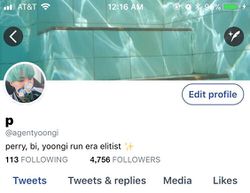 In the alternate universe of the story, the cast of Phineas and Ferb are K-pop fans who have Twitter accounts and are active in K-Pop Stan Twitter. It follows the characters Heinz Doofenschmirtz and Perry the Platypus, who are mutual followers (oomfs) in the BTS ARMY and eventually get together. Unlike many chatfics which mimic social media but are published to fanfic sites, the work was written and uploaded directly on Twitter in the form of manips which showed the characters interacting on Twitter and in text messages.

The fic quickly became extremely popular. While the story was a WIP, the writer occasionally used Twitter's poll feature to let readers vote on what the characters would do next and influence the story. Both people who were and were not K-pop fans enjoyed the story – the vast majority of readers, like the writer, were not in Phineas and Ferb fandom. In July 2019, the original Twitter account that the work was posted from was deleted, and the writer reuploaded the full work to a new account with minor edits. Before it was deleted, the original first tweet in the thread had over 3,600 retweets and 5,300 likes, but the exact number - and the total number of interactions on all the original tweets - is unknown.