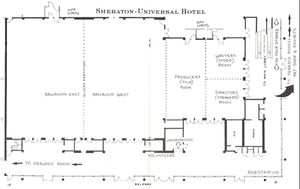 map of the con printed in the program book 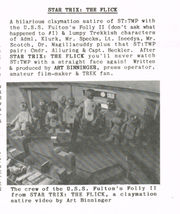 from the program book, info about the fan film 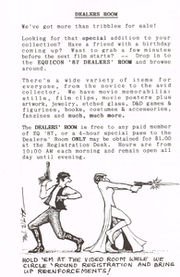 from the program book, info about the dealers room

The Equicon in 1987 was chaired by Bjo and John Trimble. The program book doesn't list any other volunteers.

Introduction from the Program Book

This prompts the ages-old committee query: "WHY DO WE DO THIS, ANYWAY?" There has never, in all of history, been a satisfactory answer to that question. It was first asked by a committee member when Moses held a small convention on the shores of the Red Sea. Some attendees complained that they didn't like seaside resorts for conventions, others complained that the special effects looked fake ...

During the nerve-wracking, back-breaking last-minute work that always needs doing, someone said of a committee : "IF MEN IN WHITE COATS CAME FOR US, THERE'S NOT A THING WE COULD SAY IN OUR DEFENSE!" We don't always 1ike it, but we thrive on the challenge of putting on a convention with some semblance of panache & verve (& even, with luck, looking as if we'd planned it to happen the way it did!) We do it for the satisfaction of hearing a fan tell us it's his very first con & he's had a WONDERFUL time!

We go through this hassle for a special meshing of creative minds that occurs when a great working committee makes the event come together beautifully! Look around for committee badges to give them a smile. They've given you a convention.

The front cover was by Bjo Trimble and Mark Whitefield.

The program book was 40 pages long. It contained ads, bios, short descriptions of the films shown, photos, programming, a map, and an article about Japanimation.

It did not include the member names of the con com.

Some Tidbits from the Program Book

Earthrise TV Network: Just announced: an all-science fiction, science fact, horror & fantasy cable TV channel! EARTHRISE will cablecast uncut movies to mini-series. But it needs your support to succeed. If interested in this idea, pick up a flyer at the "freebie" table or write to: EARTHRISE, 2719 Delia Dr., Dayton, OH 45408.

Please feel free to take photos to your heart’s content but follow the basic VIDEO DOUMENTATION rules…… Don’t flash in guest’s faces. Help make EQ more fun for all by observing basic common sense & courtesy…. Equicon will be video recording the convention. You’re also welcome to do so, too. Be courteous & follow the rules. 1.) All video operators MUST register w/VIDEO DOCUMENTATION. Ask for T. Benoun or G. Dennis. 2.) Masquerade or Fashion Show: no extra lights, getting in front of audience, directions to stage or participants. Video has still photo rights in PHOTO AREA. 3.) GUESTS & WORKSHOPS NOT TO BE VIDEO-RECORDED EXCEPT BY EQUICON. 4.) So we can edit & preserve the best of EQ 87, please let us buy a copy of your tape. Thank you.

HIGH CONVENTION FEES-GREED OR NECESSITY? Only 10% of a con register well ahead of time: about 50% join close to con-date, and 15% to 25% join at the door. So con-committees must work with money that isn't there, trying to guess how many fans may (or may not) attend. Some con-coms do crazy things for working capital: get bank loans or mortgage their homes. Others panic and cancel their conventions when pre-registration isn't high enough -then fans wonder what happened. High prices & extra charges for workshops, parties, at-the-door fees, help pay back loans and/or build a budget for the next con. If ail fans joined EO 88 atEQ 87, there would be enough cash to make detailed plans, rent films & have a healthy Working Budget without worrying if money will be there when it's needed.