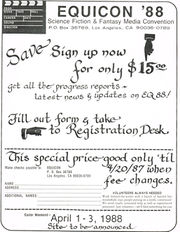 a flyer printed in the 1987 Equicon program book

This weekend at the Sheraton-Universal Hotel, one can become immersed in the great family of Trekkers who are celebrating all-things "Star Trek." The event is Equicon '88, a science-fiction media convention that opened Friday and continues today and Sunday.

Fans will revel in the continuation of a 21-year dynasty with special guests Walter Koenig (a.k.a. Pavel Chekov), from the original "Star Trek" TV series (who will sign his new book, "Buck Alice and the Actor Robot," today), as well as at least nine members of the production crew from the new TV series, "Star Trek: The Next Generation." Included among the "Next Generation" guests is executive producer Robert H. Justman, who will screen a heretofore unseen gag reel from the new series. Some folks will believe they're in Trek heaven.

There will be a galaxy of other events: film presentations, including a separate showing of three serial cliff hangers, a costume contest, a charity auction and raffle, the proceeds to go to the Motion Picture & Television Fund, the Kay Johnson Chemotherapy Fund and the Justin Welles Greenberg Trust.

Panel discussions are scheduled today and Sunday, the most outrageous being a horror makeup demonstration by Mike Le Vitre and Mike Dizacomo, starting at 10 a.m. today and scheduled to run three hours. [1]