Epiphany is a 269-page Wesley/Angel slash and het anthology written by The Brat Queen. Zine art, design and layout by Neige. 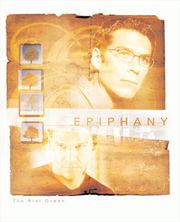 The stories in Epiphany: Arc One are written in prose format and occupy the first 202 pages; the Strange Bedfellows stories are in script format and concern the Spike/Buffy pairing.

A word from the author: Herein lies the first arc of the Epiphany series, a collection of stories that was supposed to be a one-off and ended up taking over my fanfic life. Had I known when I wrote "Everybody Fell" that I would go on to write over fifty stories spanning dozens of concepts for our boys - well I would have probably given the series a better overall title, that's for certain. ;) The series gets its name from the episode that inspired it. The subtext between Angel and Wesley in that ep was so strong that during the commercials I was calling up my friends and screaming into their voicemails "Why won't they just FUCK already?"I had to fix it, and herein lies the result....Arc One also touches on the fanfic series Strange Bedfellows, which was written by my friends Meredith and Keren (Buffybot), and covers what was going on with Spike and Buffy during all that time. There's a couple of crossovers that take place, and you can find all the Strange Bedfellows stories that are needed to explain them in the back of the zine.[1]