Dead Reckoning is a gen anthology of Professionals fiction. 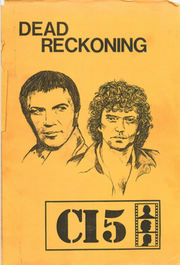 The zine was originally published in two volumes, and at some point, Entropy Press issued both zines in one volume.

Note: on some Pros fan resources, this title, "Dead Reckoning," is sometimes mistakenly attributed to the six-part series by Barbara Jones and Sara Lansing, the first of which is Operation Assegai. 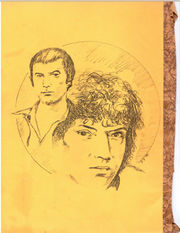 back cover, artist is JJ Adams

Dead Reckoning 1 was published in 1986 and contains 77 pages. The three stories, and some of the art, are by pseuds of Jane of Australia.

...Is worth at least half a dozen ideas in the head, and this one is very much in the hand! It's not a huge zine, by the standards of some, which are the size of telephone directories — but it's not an expensive one either! That was the objective we had in mind at the outset, to do a zine that offered a lot of reading, nice graphics and art — and all that at a price you can actually afford to pay.

DEAD RECKONING is the result, and we're hoping (read: pestering) for some feedback from you! The big question is — will there be a DR #2? At this point, we really aren't sure. It depends on how well this issue fares, if people want another issue, and pressures of work on Ye Editor. The good thing is that a zine this size isn't so daunting a job to do: you don't have to make a big production number out of it, so the load of work on my stooping shoulders shouldn't preclude another issue, always supposing you folk out there want to read one!

Please do tell us your impressions of this issue; by all means, send a SASE (or, if you're out of Oz [Australia], a SAE and two International Reply Coupons), and when we really know v/hat's happening, we'll send the flyers! If you'd like to submit a story or art — again, please do, but on the understanding that the zine is only 'a maybe' at this stage... We'll know by about October or so if there will be a DR #2 (or not), so you might like to send a SASE instead, and join us in waiting to see what transpires!

I'd like to thank the contributors, whose work is a real treat — especially, I'd like to thank the artists from the USA, Kate, Dani and Ruth, who turned up trumps. The fiction speaks for itself: we thought there was space in this world for a non-"/" zine (a very rare breed!) that still catered to adults and offered value-for-your-zine-buying-buck; and of all the problems solved along the way, it was the zine size that turned out to be crucial. Aussie postal brackets are ludicrous. You can mail 259gms for $3.55 (airmail to the USA) and then it goes to 36.55 in a single bound. The trick is, you stop at 80pp, and by doing this, you get a zine that'll fly 'round the world fora 'ppd.' price under $10!

So: we'll put any SASEs you care to send on file, and by October or so we ought to know if there's enough interest in a non-"/" PROFESSIONALS zine, to make DR #2 come to pass. Our fingers are crossed, and we can't wait for the feedback, folks. Hint, hint!

But for now, to the right stuff...

Dead Reckoning 2 was published in 1987 and contains 79 pages. It has three stories. 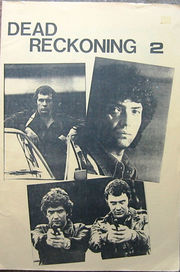 Dead Reckoning as a combined issue had 180 pages. It was published in 1993. It has six stories.

Summary from the flyer: "Both the classic 1980s Professionals gen-zines under one cover! Featuring all the stories, all the art, in original format, with a new introduction and new cover, something like 165pp..."

Summaries below are from a flyer:

In 1992, a proposed third volume was announced: "An anthology of stories, vary sexy and teasing, just-pre-B/D. Full info is not available at this time, but the zine is taking shape and a proper flyer will be done when possible. So far, it's looking gorgeous! Incidentally, space is left, and if anyone has a story that would fit, let's see it! Planned for March/April '93. so your deadline would be about February. Should be the same size/price as CMH #10." -- On the Double #25