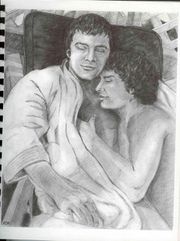 The front cover is by Alex T. MacKenzie. There is no interior art.

To: Agnes (proofreading), Sandy, Blackbird and Caroline for critique. Rachael, Sandy, Agnes, Blackbird, Lezlie Conch, Pam Rose, and Katharine for "the wonderful story brainstorming sessions at Escapade which led to "Love in a Faithless Country."

Story summaries from the zine:

See reactions and reviews for Love in a Faithless Country.

See reactions and reviews for Dance While You Can.

See reactions and reviews for Fit to be Tied.

[zine] Close Quarters, from Deathless Pros Press, is one of the nicest anthology zines I have come across in a long time. The stories are all set in the mainstream CI5 universe, but are still refreshingly off-beat - the sort you can read over and over and glean a little more out of each time.

"On A Hot Summer Night" by Alex T. Mackenzie begins with a party at Murphy's flat. Both the Boys are more than a little drunk and just about make it to the sofa. Their boozy affection for each other increases in proportion to their inebriation until it finally ends in a drunken kiss. In the morning, Bodie acts as though nothing has happened, and it is two days later before Doyle confronts him with it, whereupon he goes into denial...

"Strictly Classified", another one by Alex T. Mackenzie, is perhaps the least of the stories. On an undercover op, Doyle goes on a blind date via the gay personal columns ... and guess who turns up to meet him!

[for this fan's comments regarding the other stories, see those individual pages on Fanlore] [1]