Clancy Brown is a popular character actor known for portraying such a huge range of roles that he's almost ubiquitous. As Clancy puts it on his social media profile: "The guy on that show and in that game. Also in some movies."[1]

He is often cast as the villain (Kurgan in Highlander) or an authoritarian figure (Sgt. Zim in Starship Troopers), but can also play the best and most reasonable of men (Rawhide in Buckaroo Banzai). Taking into account both his live-action work and his voice work for animated shows and video games, he is one of the few actors who has worked across the majority of the well-known media franchises. 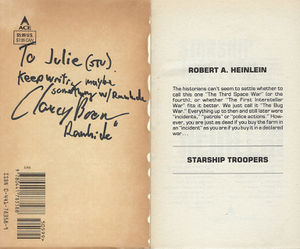 Anecdote with Evidence by Stew:

Back in the late 1990s, I received a book in the mail from a friend of mine. It was a mass market copy of Starship Troopers by Robert A. Heinlein, which felt a bit random. When I opened it up, I found a message written in Sharpie on the inside front cover: To Julie (Stu). Keep writing, maybe something w/ Rawhide. Clancy Brown "Rawhide". OMG, I thought, he doesn't realise what I am known for writing about Rawhide! Which is, of course, Buckaroo/Rawhide slash.

My friend didn't include a note, so I promptly followed up with her via email. She had been Clancy's minder at a con while he was promoting the Starship Troopers film (1997), and she'd asked him whether he'd ever read any fanfiction. He replied that he had. She tentatively says that some of it... includes relationships that weren't originally intended... "I've read some of that, too!" he happily declares. She responds that she has a friend who writes that - and he says, "Pass me a book. I'll send her a message."

I've only ever shared this story with a few people, and without naming the actor involved, as I never would have brought up the subject with him myself back then - and I probably still wouldn't, to be honest. But I think we all deserve a "breaking the fourth wall" story that has a happy ending. And Clancy deserves kudos for being so open and supportive way back when. This little paperback (now discoloured with age) has been sitting in my writing reference shelf ever since, as a treasured and completely unexpected piece of encouragement.

Clancy, I did indeed keep writing.

There are currently 18 works on AO3 tagged with Clancy Brown as a character.[2] These all relate to the Detroit: Become Human (video game) fandom, and often pair him with actor Bryan Dechart who voices the playable character Connor. Most are written in Mandarin.

Other examples featuring his characters: