From Fanlore
(Redirected from Cigarette-Smoking Man)
Jump to: navigation, search 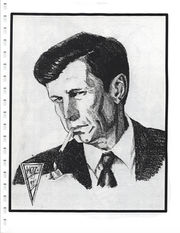 The Cigarette Smoking Man is the main antagonist in The X-Files. He represents the evil of all humankind.

Canon About the Character

He was born around 1930-1935. His real name is C.G.B. Spender. He has a wife, Cassandra Spender and with her a son, Special Agent Jeffrey Spender. Out of a relationship with Teena Mulder he has another son, Fox Mulder.

An attempt to kill CSM was made in May 2002 on behalf of the US-government, but he managed to survive with the help of alien technology.

The following content is a spoiler, please click to show.
According to CSM, he is the father of William van de Kamp, when he medically raped an unconscious Scully.

The nickname CancerMan was first coined on ATXF, one of the first usages of the term was on November 12th 1994 by user Jeffrey P Wendt[1] The name even found it's way as a canonical name for the character on the show.

Fannish Engagement with the Character

The CSM is a character X-Philes love to hate. From the first episode on he manipulated both Mulder and Scully and their work on the X-Files and is often perceived as the "Darth Vader of The X-Files"[2]. He can often be found in mytharc-centric fanworks.

The Black Lung Association (a member of Chaos.x-philes.com) was a mailing list that focused on discussions about the character.

The main paring with Smoking man is CSM/Teena Mulder. Other pairings include CSM/Diana Fowley and CSM/Marita.