He created some of the world's best-known fictional characters and is regarded as the greatest novelist of the Victorian era.

Dickens's literary success began with the 1836 serial publication of The Pickwick Papers. Within a few years he had become an international literary celebrity, famous for his humour, satire, and keen observations on character and society.

Like Shakespeare and Jane Austen, Dickens has inspired numerous professional and fan authors to write spin-offs or other works based on his creations. However, with the exception of Christmas Carol adaptations (which are enduringly popular), there are notably fewer fics based on Dickens's canon than there are stories based on Austen's work or even Shakespeare's. On Austen Authors, Victoria Kincaid identifies this lacunae and identifies some reasons Austen is potentially more popular with fanwriters:

Obviously one part of the answer has to do with the popularity of romance; the marriage plots in her novels make them particularly accessible and appealing to a modern audience ... Wuthering Heights has a plot that meanders as well as several characters of questionable morals that modern readers might not identify with. And don’t get me started on Dickens or Hardy.[1]

Some examples of professional authors writing Dickens fanfiction include Blackadder's Christmas Carol, (a fusion of Blackadder and a Christmas Carol that uses the plot of the latter to talk about the former; or Scrooged, a modern AU of a Christmas Carol. More examples: here); Fagin the Jew (Oliver from Fagin's POV); Evrémonde by Diane Mayer (a continuation of 'Tale of Two Cities'); and Dickensian (a massive crossover fic that brings together characters such as Jacob Marley, Little Nell and a young Miss Havisham).

Dickens died before finishing 'The Mystery of Edwin Drood', and many writers have attempted to complete the novel for him. One early example is 'John Jasper's Secret' by Henry Morford, which was first published in 1871 and wrongly attributed to Charles Dickens, Jr. and Wilkie Collins. The Doctor Who episode 'The Unquiet Dead' playfully suggests this book was inspired by the author's encounter with "ghostly" aliens.

One particularly noteworthy, if not especially famous, example of Dickens fanfiction is Robert Graves's 'The Real David Copperfield', a fix-it fic for the Dickens novel. (Graves is best known as the author of I, Claudius.) The Spectator notes:

Dickens ought to be ashamed of himself. Mr. Graves says so, and in The Real David Copperfield (Barker, 9s.) kindly explains everything that he would have been ashamed of, if he had only thought of it soon enough. For example; Dickens did not mean David to have loved Agnes Wickfield all his life. Certainly, he was to marry her after Dora's death, but only as a business arrangement. All his love had belonged to—little Emily.[2] 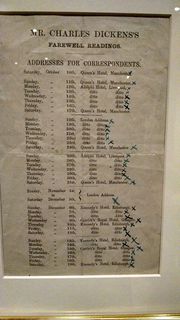 During the tours, his manager published his addresses in advance so fans could send him letters.
Dickens enjoyed huge popularity in his day, roughly equivalent to that of someone like JK Rowling (herself obviously influenced by Dickens). This degree of mass popularity is perhaps best demonstrated by the enthusiasm with which Americans met his 1842 trip to their country:

When Dickens's boat made a stopover in Cleveland, he awoke to find a "party of gentlemen" staring through the cabin window as his wife lay in bed.

"If I turn into the street, I am followed by a multitude," Dickens complained in a letter ... In 1842, there were no international copyright laws so Americans could read Dickens's works for free in pirated editions.

Once Dickens saw how popular he was in the US, he realised he could virtually double his income if his American fans started paying a going rate for his work.

"I am the greatest loser alive by the present law," he complained in letters home.[3]

Dickens was also an important figure in the rise of celebrity culture. The Morgan Library's Dickens exhibition illustrates the mass popularity of his (somewhat contentious—his confidant John Forster felt they were beneath him) public readings, and the variable fan reactions.

"Cartomania" made him an instantly recognisable figure.

He felt a need to explain (in his own publication, All the Year Round (the successor to "Household Words"), where he also supported progressive female writers like Elizabeth Gaskell (Cranford, North and South)), the failure of his marriage to a public that was personally invested in him. Dickens feared the damage the separation would do to his reputation.

Dickens' novels were published in serialised form, and came out something like how an episodic television show is released today. This created a lag period (sometimes extremely extended) between fans reading the previous chapter and receiving the new one (some American fans waited at the docks for the next instalments). There were numerous adaptations (both authorised and unauthorised) of Dickens's works, during and after his lifetime, some of which were published before the official serial had been completed. "In those cases, playwrights would make up their own endings to the story, much to the chagrin of the actual novelist."[4]

An example of the historical Dickens fandom can be found in the 1868 novel Little Women by Louisa May Allcott. In the novel, the main characters form a fanclub and start a fanzine for Dickens' 'The Pickwick Papers'. See, Fanfic in 'Little Women'.

In Of Sex and Faerie: Further Essays on Genre Fiction, John Lennard claims that "there is certainly at least one Dickens fanfic from the 1860s that survives in a manuscript fragment, W.G. Freeman's 'Pickwick in Jamaica', which takes Mr Pickwick and Sam Weller, from The Posthumous Papers of the Pickwick Club (1837), to Spanish Town in the mid-late 1830s."

Dickens fandom is relatively sedate, particularly in comparison to that of Austen: the megafandom of the 18th and 19th century novel world. Fanfiction.Net groups all Dickens fanfiction together under the author's name.

Archive of our Own has individual tags for each book, all of which have relatively few works (most of which were produced either for Yuletide, as fanfiction of the television show 'Dickensian', or as part of a crossover with another fandom). Dickens's novels are sometimes nominated in Yuletide, but are rarely large fandoms within the Yuletide selection.

As far as good short fanfic that does not involve gay sex (of the hot Darnay on Carton variety) and cameos from Les Miserables (If I find any Sydney on Grantaire action, I might have to stab myself in the eye) , I've only found one. This is "The Seamstress" by Little Lotte. It's a sweet, sad little gem of a fanfic about the seamstress who rides to the guilotine with Sydney Carton which manages to maintain the tone of the original (as much as is possible). This is THE example of a good fanfic. Read it.[5]

AO3, for example, lists almost 700 fics that match on the search 'Christmas Carol', and while not all of these follow the plot '[Character X] is bad in some way, meets 3ish entities around Christmas, and is then reformed', many of them do.

"Others, those more invested than I in a reading practice that defines its goal as setting the record straight about authors and characters who are not, might dwell on Scrooge’s choice not to marry in favor of partnership with Jacob Marley (like himself, a bachelor businessman) whose name he declines to paint over even after his partner's death and to which he continues to answer just as if it were his own: “It was all the same to him” (46). They might point to the implicit anality in the text's depiction of that partnership and cite the lament of Marley's ghost that he never allowed his spirit, in life, to rove “beyond the narrow limits of our money-changing hole” (61); they might point to the ghost's remark to Scrooge— “I have sat invisible beside you many and many a day” (63)— or to Scrooge’s comment on the bond that once connected him to his fellow apprentice, Dick Wilkins: “He was very much attached to me, was Dick" (75). They might even point to the charwoman’s representation of Scrooge as a “wicked old screw” who deserved that his worldly goods be stolen from the very bed of his corpse because, as she puts it derisively, he wasn't “natural in his lifetime” (115). And in light of all this, such critics might claim that Scrooge has need of a rainbow flag, not a Christmas tree, with which to spruce up his home. In proposing that Scrooge be viewed, instead, as a canonical literary instantiation of sinthomosexuality, I make no pretense of revealing an “identity" encoded in the text. Rather, I want to attend to the potent effects of the cultural fantasy linking Scrooge to the fate of TinyTim as surely as the sinthome is linked to the historical consistency of the subject, or as queer sexualities are linked to the conceptual coherence of heterosexual desire."