Well, fen, here it is, MediaWest time again. And as seems to have become the norm for some of my zines, I am simul-pubbing Chalk and Cheese 16 and Chalk and Cheese 17. C&C16 just got too big, and had to be split—five days before the con! Ack!

I've also started a zine agenting business called Agent With Style. Since Bill Hupe has left the arena, and left no one to take up the business, I'm hoping to do just a fraction of what he did in getting the zines most fen would never see out and into fandom's eye. I have a long list of zines available—many new, some older and hard to find—for a double-stamped long SASE. Or you can just write me at zines-for-sale@juno.com, and I can send you a long e-list of available zines.

I'd also like to publicly thank the folks who brought us ArpaNet, the precursor to the Internet, because without them, this zine—and many others I'm putting out—would have taken a lot longer to get to you. Let's protect this precious way of communication! Strike down censorship on the web! 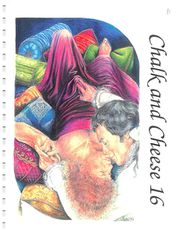 ...in my humble opinion C&C 16 is a washout. Nothing thrilled or even mildly entertained me. It's full of cross-universe stuff and/or gen stones. Since I find gen Pros stories completely boring, the zine never had a chance with me. The exceptions to the gen stuff were lacklustre and certainly couldn't make the zine worth the money to me. The saving grace was the cover. It's a beautiful Lovett color illo of Doyle beneath a rose satin cover with Bodie caressing an obvious bit that is well defined by the cover. The illo, in my opinion, is worth the price of the zine, so I recommend buying the thing but will leave the story reviews to someone who likes the kind of stories featured. [1]

Chalk and Cheese 17 The front cover art is by Suzan Lovett and other art is by Joey Rodrigues and Pat Cash. It was published in May 1997, at the same time as issue #16. 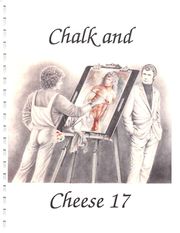 front cover of issue #17, Suzan Lovett - "No, Bodie, Not Even A Little Peek" -- the original art was for sale at Lovett's website

See reactions and reviews for Predators.

[Dust and Secrets]: During the unofficial visit of an Arabian King, Bodie and Doyle have to organize security with a SAS contingent in Sudeley Castle, Gloucestershire. Soon, they can't shake off the feeling that the stories about the castle's ghost might be true - and the ghost seems to be especially fond of Ray Doyle. I must admit that at first, the author's decision to mix The Professionals with a supernatural storyline threw me for a loop - ghosts and CI5? For real? Surprisingly enough it works, and the ending of the story is simply perfect. Don't miss this. [2]

[zine]: ... no. 17 was fantastic! Not a word I would usually associate with the typically uneven quality of C&C. Not a clunker in the thing, and I always feel lucky when I find one-and-a-half stories to like in C&C (every issue usually features one gem)! First off, the cover is another Lovett color illo, again worth the price alone. Bodie, all dressed very nicely in his usual dapper attire, is posing for Doyle, who is painting his picture. Except that the Bodie in the painting is quite naked, very well endowed and has long, flowing hair (goes with the long flowing cock). Now to the stories (all of which are slash!) "Dust and Secrets" by FJ - B&D get shipped off to help the SAS guard an old castle. Seems the owner of said castle is expecting a visit from her old school chum, a thinly-veiled version of Jordan's Queen Noor. Jealousy over an old mate of Bodies gets Doyle to whisk our favourite blue-eyed boy off to bed. Then there is the ghost to deal with. Good solid story. No plot holes, but not for anyone who can't take a mild supernatural influx. I don't usually like that in Pros but ghosts and old English castles work for me. [3]

[zine]: I want to start off by saying I thoroughly enjoyed Chalk and Cheese 15. I must say I was rather surprised (pleasantly so) by the artwork that made it into my story. It gave a whole new meaning to a shower scene. And I want to thank you for printing it.

I liked the unexpected twist in "Into the Light." The way it started out, I was fully expecting a monster to jump out at the boys, instead of Doyle being scared of his mum's basement.

"Redemption" was well done. I could see Bodie going off the into the fringes, but never completely back to the other side of the street if he lost Doyle. I mean, Doyle taught him by example that there were some principles worth holding on to and defending. He even gave Bodie back his sense of worth and helped him rebuild his Code of Honour and Bodie wouldn't destroy that gift. I also loved the fact that Bodie, at least in own his mind, got a chance to make up for not being there to save Ray"s life. He may not have Ray's overdeveloped sense of guilt, but he would feel very guilty about not being there to save Ray, because if he had settled things with Ray that morning, then Cowley wouldn't have separated them and he would've been there to try and save Ray or at least die with him.

As for "Raymond and the 3 CI5 Agents," I'm sorry to say I suffered from a terminal sugar overdose when I read it.

I liked "Ghost of a Chance." Lady Beatrice must've been a real scandal to the nobility when she was alive. A pity there aren't any pictures of that house at just the right point that caught Doyle's attention. That certainly would put a capper on the story, wouldn't it? It's nice to meet a ghost with a sense of humour and one who wants the rest of the world to have a happy love life just like she did. I also love the fact that she is no respecter of rank, since she chose to play her pranks on Cowley. Can you imagine what she might've done if Cowley had decided to stay there overnight?!

Oh, by the way, please tell Caroline, I know of a car that had to be in much worse shape than the one she and her friend drove back from MediaWest in. I know~l had to drive it while I was unemployed and couldn't afford anything better, and the only thing holding it together was rust and a whole tot of prayer.

Kaycee's 'The Art of the Possible" is a very good beginning to a new Pros A/U series and I look forward very much to reading the next installment to see what develops. (-Look for the next part of this series, The Next Day," in this very issue.-) I find it very interesting that in all the A/U series, Murphy is partnered to whichever one of the boys happens to be in CI5. Never Jax or Anson (those are the only two solos I could think of other than Murphy). Not that Anson would've survived very long as either one's partner.

Hats off to Jane Mailander and her Quanta Universe again. That girl is positively wicked! Not only does she allow Doyle to play Sherlock Holmes, a creation of Conan Doyle's, but she finally gave us a blue S'murph! But the capper was making Cowley a peg-legged elf! He did finally get to many Annie, though, after a fashion, so that had to be a high point for him. I wonder if he's going to be accompanying the boys from now on? It could cause all kinds of awkward questions in Whitehall if he disappeared at random intervals, not to mention how he'd explain it to the Home Office or his staff. I can just see it now: "Well, sir....you see, it's like this. I had to help save the universe from a horde of hairy aliens. Sir." Clang! and he's in a little white room in a jacket that lets him hug himself all day. I just have one question for Jane, how did Bodie wind up with two right arms?

I can't wait to read Jane's next story. (Pant, pant, pant! Any chance of some artwork to go with it?) I know of at least 2 people who'd love to see a picture of Bodie as a pirate and I wouldn't mind seeing one of Doyle swashing his buckle.

"Bodie's Words to Live By," as always, are a good laugh, keep them coming.

I'm going to sign off or I'll never get this out to you, Mysti. Again, I loved the zine from cover to cover (gotta remember to wipe the drool off the pictures), and look forward to the next issue. [4]

[zine]: Please tell Diane Morris I hate her. Remember I said the one compelling (I can't really say "enjoyable"), most horribly good death story I'd read was "Redemption" in C&C15. and I just had to re-read it the next morning, and it still made me cry, and it was so wall-done and emotionally wrenching and, and... Well, anyhoo, I just read C&C14. and there was another story that did the same thing to me, and then I noticed it had something else in common with "Redemption", and that was the author. This one was "Autumn Rain". It was absolutely awful, and I mean that in the best way! So if you could please tell her I hate her guts and need some happy stories now, I would be much obliged! This is one talented lady. And she never did a sequel to AR, did she? It's completely self-contained and doesn't need one, but at the same time it does leave plenty of angsty room open for one. so I wondered. (-While Diane Morris didn't write a sequel to 'Autumn Rain,' she did give Jesse her blessing to do so. So, look tor Jesse's story, "Winter Chill," in this very issue.-) Thanks for everything you do to get these zines out to us! [5] 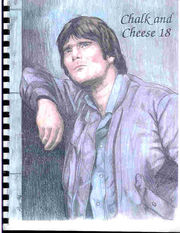 Chalk and Cheese 18 was published in 1997 and contains 150 pages. It has art by RAGS (Front Cover), Joey Rodrigues, Pat Cash, and Kate Nuernberg.

See reactions and reviews for Commemoration 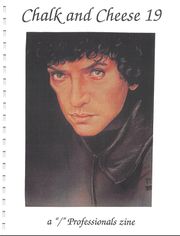 Chalk and Cheese 19 was published in May 1999 and contains 241 pages. The front cover is by Karen River. It contains no interior art.

This was the last issue.

I've had a great time editing and putting together these nineteen issues of Chalk and Cheese and I'm looking forward to doing a special anniversary issue of Chalk and Cheese 20. so I'm asking for everyone's help to make this a huge blowout zine! (Even bigger than this one!) Maybe we can focus on Bodie and Doyle's relationship through the years and how they've handled (and are still handling) certain aspects of their lives. Maybe you can write long, involved stories showing that our lads are still going strong twenty years later. Maybe you just want to send in a cartoon or poem you've done that lampoons or highlights the essence of The Professionals. Whatever it is, I'm hoping you, the reader, the writer, the very person who picks up this zine, will want to help make C&C20 the biggest, snazziest, most talked about zine of the year! So send a story or two and make this zine grow!