Bringing Home the Bacon is an essay by Paula Smith in Psst... Hey Kid, Wanna Buy a Fanzine? #5.

Its focus was on the newly published books Enterprising Women and Textual Poachers and the topics of hurt/comfort and the value of fandom. 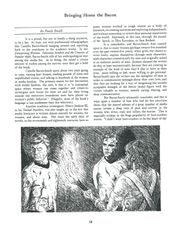 It is a proud, but not so lonely a thing anymore, to be a fan. At least, not with professional ethnographers like Camille Bacon-Smith hanging around and reporting back to the mundanes in the academic world. In her Enterprising Women: Television Fandom and the Creation of Popular Myth, Bacon-Smith tells of her anthropological stay among the media fen. In so doing, she raised a certain amount of ruckus among the natives, once they got a hold of the book.

Camille Bacon-Smith spent about two years going to cons, visiting fans' houses, reading pounds of zines and unpublished stories, and talking to hundreds of the women in media fandom. The primary reason for her fascination with media fandom, she says, is that it is "a conceptual space where women can come together and create-to investigate new forms for their art and for their living outside the restrictive boundaries men have placed on women's public behavior." (Happily, most of the book's language is less academese than this selection.)

Another academic investigator, Henry Jenkins III, in his Textual Poachers, was also caught up in the fact that media literature is written almost entirely by women, for women, and about men. Not since the early days of novels, in the seventeenth and eighteenth centuries, have so many women worked in rough unison on a body of literature, co-creating universes and exploring independently and without censorship or review their personal experiences of the world. Expressed, in this case, through the mouth of Mr. Spock, or Illya Kuryakin, or Sam Beckett.

It is remarkable, and Bacon-Smith does remark upon it, that so many women (perhaps twenty-five hundred over the past twenty-five years), when given the chance to write freely, express themselves through male characters, male characters created mostly by men and originally aimed at an audience mostly of men. Jenkins claimed the writers do this, at least unconsciously, because they are creating an example of the kind of men they'd like to have in their lives: more willing to feel, more willing to get personal. Bacon-Smith says the writers use the metaphor of men in order to communicate messages about their own lives, and that they are looking for a way of integrating the socially acceptable strength of the heroic (male) figure with the virtues valuable to women, namely caring, sharing, and deep communication.

But Bacon-Smith ultimately concludes, and this is what upset a number of fans who had let her interview them, that the shared subtext of a great number of media stories reveals a deep vein of pain and sorrow in the women who write, read, and collect the stories. This is especially evident in the huge popularity of hurt-comfort stories. "I didn't want hurt-comfort to be the heart of the [media fandom] community. I didn't want to accept the fact that pain was so pervasive in the lives of women that it lay like a wash behind all the creative efforts.... [F]ans wrote to work through their own problems of personal suffering."

Now, most writers in any fandom are amateurs, and amateurs are easily upset by any hint that their stories aren't the best thing since The Bible. To be told, in a big, thick tradeback book written for an Important Audience, that their writing reveals them all to share "problems of personal suffering" got more than one fan's dander up. Moreover, because Bacon-Smith had seemed to act personally in getting her data-borrowing unpublished zines, visiting fans in their homes, attending small conventions-the offended fen took it personally. She is not likely to get more data from them for a second book.

On the other hand, I think there may be something in what Bacon-Smith says....

It is very possible that, as a group, we women are trying, in our stories, to provide that hours-long motherly comforting that may be missing from our lives, comfort for rapes actual, symbolic, or potential; and justice for wrongs that go unatoned or even unadmitted in reality. And why not? If that's wish-fulfillment writing, well, there are tawdrier wishes to write about than justice and tenderness.

Robert Bly, the founder of the men's movement, called the great sorrow of men, "grief for the vanished fathers." But he also identified the great sorrow of women as, "pain that what they have to give is not valued." The zines of the media fans are not valued in fandom, except by the media fans themselves. Yes, there are objective reasons for that-the writing quality is uneven, the emotionalism is sometimes embarrassingly excessive. But the writing is also sometimes powerful and acute, and deeply human. And "regular" sf writing, even the professional variety, sorry to say, has nothing to match the best of media fandom. There's not enough hurt-and definitely not enough comfort.

Paula Smith's "Bringing Home the Bacon" is a terrific, well thought out and well backed up extrapolation of Camille Bacon-Smith's "Enterprising Women." Paula makes some points about why women write h/c that aren't comfortable for everybody to read. More power to her for putting them down where the people who liked the woman-abuse in Eridani's "sexy little Data romp" can see them. Psst... Hey Kid, Wanna Buy a Fanzine? #6 </ref>