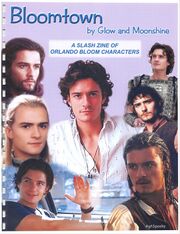 Bloomtown is a 175-page slash anthology of fiction portraying characters played by Orlando Bloom. The stories are by Glow and Moonshine. The cover is by Agt. Spooky.

Note: the original edition in 2011 by MoonGlow Zine Productions describes "California Boys" as an excerpt from the full novel. The edition in 2012 by Agent With Style does not specify if its edition also contains just the excerpt or the full novel. This unknown factor with the later edition is complicated by the fact that AWS never puts the total page counts on its website.

All but "California Boys" were nominated for a 2012 Fan Q.

The summaries below are from Agent With Style: