California Boys is a 259-page slash Elizabethtown novel by Glow.

It is second in a series, the first being Kentucky Sons. The pairing is Drew Baylor/JD (Johnny Depp). It has a sister zine called Bloomtown.

From a summary by Agent With Style, a distributor for another zine in the series, Bloomtown: "California Boys is the sequel novel to Kentucky Sons. Both take place partly in the universe of the movie "Elizabethtown," only a character bearing a striking resemblance to Johnny Depp -- named JD -- plays the love interest opposite Orlando’s character of Drew Baylor. This story is taken from the part of the novel where Drew and JD first arrive in California. All you need to know to enjoy this hot sample is that Drew met JD in Kentucky, they fell in love under difficult circumstances, and Drew decided to come to California to live with this incredible man. Hopefully, this smoking hot scene will whet your appetite for more, and you will want to read the full length novels. At the very least, you will get to enjoy the loving that takes place as they christen their new home." 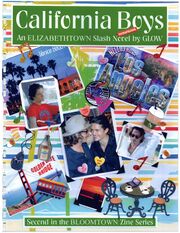