Blond & Blonde is a Harry Potter archive for fanworks featuring Lucius and Narcissa Malfoy. It is primarily a Lucius/Narcissa archive, but also accepts works in which Lucius or Narcissa are paired with another character as long as Lucius/Narcissa is not "portrayed within a highly abusive relationship."[1] 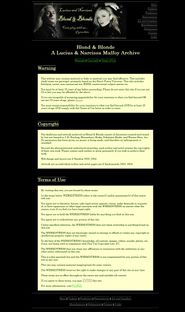 The site was created by Xandria on February 10, 2003,[2] and a mailing list through Yahoo! Groups was created shortly thereafter.[3] The archive has not been updated since February 14, 2004,[2] but remains accessible online. Both the archive and the mailing list require readers to be over 18 and warn for potentially offensive material such as slash, polygamy, incest, and other "controversial subject matter."[4]

Blond & Blonde is a member of the Potterfic Alliance.

Graphics can also be found on the site's "Miscellaneous" page, which includes wallpapers, badges, WinAmp Skins, bookmarks, and icons.

Blond & Blonde also has a page for "Dissertations", intended for "general commentary regarding the characterization of Lucius and Narcissa either as individuals or within the confines of their relationship between one another and others," though it would not accept flames or "outright condemnation" of Lucius/Narcissa.[1] However, only a single essay is hosted, a response to Order of the Phoenix by Adolfa entitled "The Family Black (Narcissa, Sirius et al) and the Family Malfoy".[7]