Blackcat's Realm (also known as Blackcat's Voyager Slash Fiction) was Blackcat's slash site, featuring her Chakotay/Paris Voyager fanfic. Stories were available in html and txt versions. The animated gif with the running black cat that was typical for Sentinel websites of the time was placed next to the title.

The site was a member of the Chakotay/Paris Slash Ring, The Star Trek Slash Ring and the TSU: TrekSmut University Web Ring.[1]

Welcome to my realm! I am Blackcat, and I hope you enjoy your stay. Most of you probably know what slash fiction is. For those of you who aren't sure, I'll provide a brief explanation. Slash fiction is fan fiction based upon a television series and showing a relationship between two of the characters of the same sex (though the term is beginning to be used for heterosexual relationships as well). Derived from the way in which the characters are abbreviated. For example, C/P Slash, for Chakotay/Paris of Star Trek: Voyager. If this is something that offends you, makes you cringe, etc., you might want to leave now. If not, stay and enjoy![2] 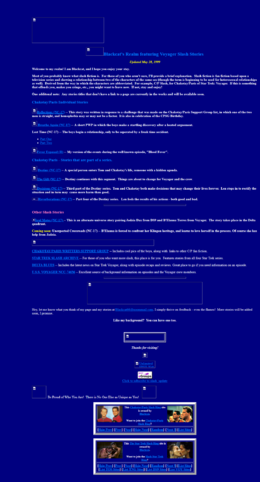