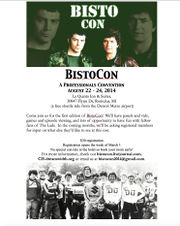 The con was held at the La Quinta hotel, a short shuttle ride from the Detroit airport.

The con was inspired by Close Quarters, another Professionals con held in 2007 and 2009. Initial planning commenced in 2013 and announcements about BistoCon went up on Yahoo discussion lists, LiveJournal, Dreamwidth, and Tumblr to provide fen information about the con's location, general format, as well as to solicit ideas and suggestions for programming in spring and summer 2014. Prior to the con, registered attendees could suggest panel topics, vote on which episodes to view collectively, and other activities.

Official programming began on Friday at noon with registration and a fan-based conversation game that required interaction to discover various traits of attendees related to the fandom (e.g., who first saw the Professionals in the UK; who first saw the show on VHS tape; who had published a Professionals zine; who had visited the Scarsdale pub; who had seen Martin Shaw or Lewis Collins perform on the stage; who had met either of the stars in person, etc.).

Following this meet-and-greet icebreaker, there was episode viewing ("Blind Run"), followed by a panel discussion on first time fanfiction versus established relationship fanfiction about Pros, and what makes a good fic work?

Saturday's programming included episode watching ("Everest was Also Conquered"), panels on 70s England (with an emphasis upon medical practices), secondary characters and canon versus fanon, and art appreciation (led by artists Lorraine Brevig and Suzan Lovett), while entertainment included several rounds of Pros bingo, a video show, and time scheduled to "sell, share & swap" fannish materials like zines, DVDs, art, music, and circuit archive stories connected to the Professionals. The evening concluded with a showing of an episode from "Robin of Sherwood" that featured Lewis Collins as a guest star (the actor who played Bodie in the Professionals), as a way to honor his death earlier in 2014.

The con organizers announced on Saturday, August 23, 2014 that the second BistoCon would take place in August 2016. The second BistoCon followed a very similar format to the 2014 gathering, convening in the same location with similar programming.

The second BistoCon took place August 19-21, 2016 in Romulus Michigan at the LaQuinta Inn and Suites. 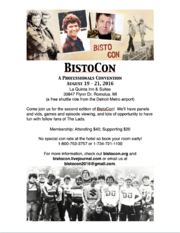 After an icebreaker game, congoers were paired off to introduce each other to the group, which segued into a shared episode watch and episode discussion afterward.

The con continued to use a single track of programming, which on Friday included sessions devoted to "Views of the Cow" (how canon and fanon treated George Cowley), and "Another Time, Another Place" (on the popularity of AUs within the fandom and favorite fictional works in that genre).

Following dinner, the con reconvened for a team trivia contest and games from 7 to midnight, with a late night episode watch for those still awake.

On Saturday, a catered group lunch at the hotel and a group dinner at a nearby restaurant broke up a day of programming that stretched from 8am to nearly midnight. Saturday's sessions included episode watching at 8am and midnight, PFL's magnificent panel devoted to a chronological discussion of the "disappearing girlfriends" of the Lads, how would CI5 operate in the present, Pros Bingo, and Kat and PRZed's panel on Professionals video making. In the evening, the Moonlight Mead memorial drinking game accompanied an episode watch, and the sell-swap-share which had been so successful at the first BistoCon was repeated with the addition of a charity auction. Proceeds of the charity auction (over $500) were donated to the Marie Curie Foundation (UK) which assists women suffering from cancer. A video show and episode watch closed out the con's second day.

On Sunday, congoers enjoyed more collective episode watching, followed by Porny Pictionary, a catered Middle Eastern lunch, and a discussion of when Bodie and Doyle might celebrate their anniversary: congoers offered their own theories about which episode marked the start of Bodie and Doyle as a couple, and how they might memorialize the occasion. After a Dead Dog panel, those remaining in attendance tore down the con suite, then adjourned to nearby Ann Arbor for dinner at the downtown Knight's restaurant, before returning to the hotel for one last round of games and episode watching.

During the con, attending members enjoyed posters and pictures around the room of the Professionals, including a "pin-the-tail on the donkey" (using individually drawn penises) life-sized version of Bodie and Doyle; prizes went to those pinned closest to each agent's crotch. Professionals-themed jigsaw puzzles and word searches also entertained people at the con, while the large array of food and drink on hand in the con suite kept the conversations lively and lubricated. 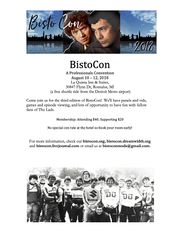 Fans contributed many items to the con's "goodie bags" including Professionals-themed pins, bookmarks, London-themed keychains or pouches or pencil sets, and other items. Again, posters and Professionals photographs adorned the con suite walls, while the life-sized Bodie and Doyle "Pin the tail" game had people drawing phallic artwork all weekend, hoping to pin one closest to the crotch.

The con's size and complexity was smoothly handled by the effective con committee, which had grown to include Sno, Krisser, Kat, CI5Mates, PFL, Cyanne, Cindy in addition to founders PRZed and FJBryan. The number of attending members also grew, such that con organizers determined that a larger meeting space would be needed in the hotel for the 2020 con.

Panels, games, episode watching, the Moonlight Mead Memorial drinking game, sell-swap-share, and the charity auction continued, with the flamboyant help of Kath Moonshine as auctioneer ("who'll give me 69? 69?"), meaning that the charity auction raised over $900 for the Marie Curie Foundation. The panel on fiction writing, led by Halotolerant and PFL, culminated in all congoers writing short pieces of fiction that were posted on the wall.

The con zine, edited by Cyanne with assistance from PFL and Flamingo, was a huge success at nearly 160 pages and featured photo-manip artwork of Bodie and Doyle by Suzan; the zine was available to congoers via a URL link listed on the back of the laminated con bookmark given out at con registration. Cyanne also gave away copies of her collected Pros video library collection, gathered from the far reaches of the internet.

For the first time, the con had a t-shirt that all could order, again featuring artwork by Suzan that was also the con's banner artwork at Facebook and Dreamwidth communities.

The weekend went too quickly, and though all the catered or group meals were similar to those at the second BistoCon, the 2018 BistoCon closed out with a shared Ethiopian feast in Ann Arbor at the Blue Nile restaurant. Once again, con goers could not get enough of the Professionals version of Cards Against Humanity, which was played late into the night on both Saturday and Sunday.

Originally planned for August 6-9, 2020, BistoCon's in-person convention became a victim of the Covid-19 pandemic. The organizing con comm decided in May that health considerations precluded holding the con in person, as originally planned. However, through the summer, con comm members mourned the loss of the in-person convention enough that by late July they decided to hold a virtual BistoCon instead. Virtual BistoCon, or BistoCon Lite, went live for two days on August 14-15, 2020, one week after the original con date. With only two weeks to plan, the con comm pulled off a minor miracle by arranging for multiple Zoom meetings, episode and vid show sessions held on Twitch, and publicity across multiple platforms (LiveJournal, Dreamwidth, Facebook, and via the online Pros Newsletter).

With extensive planning, they devised 21 hours of programming and put out the call for registration to the free event. The responses came in from Europe, the US, Canada, and Australia, and 32 fans participated in various sessions. August 14 sessions included two welcome events, that started with a brief history of BistoCon and a statement of rules of conduct, followed by 2 episode viewings (Purging of CI5 and Hunter/Hunted). On Saturday, August 15, fen enjoyed 6 panels, two distinct vid shows (plus one late night repeat of an early morning airing) of Pros vids plus long hidden gems from the 1970s, 80s, and 90s in the "Historical vids" show, multiple opportunities to chat in the online con suite, and five more episode screenings (Backtrack, Everest Was Also Conquered, Blind Run, Stirring of Dust and Discovered in a Graveyard). New to the fandom and experienced fans who watched the shows when originally aired in the 70s mingled, with frequent amazed comments like "Are you the Lezlie Shell who wrote...?" or "Are you the Pam Rose who wrote...?" or "Are you the PFL who wrote...?"

Con comm members Sno, Krisser, Kat, PFL, Cyanne, Cindy, and FJBryan encouraged the participants to share their love of the lads in a panels on the Disappearing Girlfriends of CI5 (PFL), Desert Island Fic (where FJBryan cruelly required fen to select one and only one fic to take with them to their imagined island...then generously allowed them to kidnap a Pros writer to take with them), Why Has It Lasted? (where Krisser led a wide-ranging discussion about the enduring popularity of the fandom), Hearts & Flowers or Shag & Run (where Kat asked what type of lovers the Lads would be), Does the Friendship Matter? (in which Cindy wanted to know about the relationship of being friends v. lovers in both canon and fanon), and finally Canon v. Fanon (where Krisser asked for responses to various tropes in the fandom, such as fragile Doyle). In all of these online panels, the moderator led the discussion while a second con comm member directed traffic (watching for hands raised on camera or by means of Zoom's participant list) by alerting the moderator to the next people in line. This method was on trial in the first panel and proved so successful that it continued to be used by moderators for the rest of the day.

Working rules for the online con included orderly discussion (a moderator called on each participant once they raised their hands), no discussion of contemporary events or politics, and no screenshots or publicity for attendees. As PFL mentioned at the first panel (which began at 8am Eastern US) "we want this to be a safe space to talk about the Lads."

During one con suite break (6pm Eastern US), attendees started an impromptu art show, putting their fan art--often originals from well-known artists--up to their webcameras to share with all others. Many originals by Kate Neurnberg, Suzan Lovett, Lorraine Brevig, KOZ, and others got aired around the world in this fashion.

An early start and a late end meant that what was August 15 programming in the US ran for 14 hours, enabling European fans to enjoy a lot of afternoon panels (UK start time 5pm August 15) and wake up to enjoy the concluding panels at the very end (7am August 16). Some participants, aside from the con comm, stayed for all 14 hours! When it was time to close, the remaining stalwarts were quick to note that they wanted more Pros and more BistoCon.

Following the con, registered attendees were offered the chance to receive by mail a magnet celebrating BistoCon 2020, featuring the artwork of Suzan Lovett, who designed the con logo.

Another BistoCon is planned for 2021 in May (in person, we hope; virtual if we must). The next regularly scheduled BistoCon after that will resume August of even numbered years, meaning August 2022. Continue to monitor Professionals-related LiveJournal, Dreamwidth, and Facebook communities for further details. See also https://groups.io/g/bistocon and our Discord server. Request more information on all of these from bistoconmods@gmail.com.