Beyond the Final Frontier

Beyond the Final Frontier is a slash, het and femslash Star Trek: Voyager anthology.

This slash zine features some heavy Chakotay/Paris bonding and some really hysterical entertainment, with a great many stories by our own Siubhan, whose version in #2 of the Voyager crew performing The Rocky Horror Picture Show is screamingly funny even if you're not a slash fan. The stories feature same-sex couples in sexual situations and not a lot of Janeway or heavy-duty science fiction, just so you know what to expect.[1]

The zine has a typo on the title page, mislabeling it as Star-Crossed Voyagers. 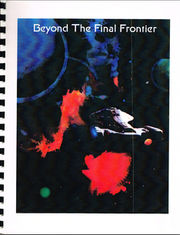 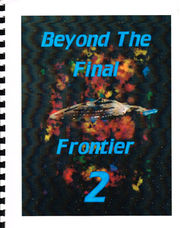 Beyond the Final Frontier 2 was published in June 1997 and contains 62 pages.

From the publisher, "It all started when Beverly Crusher wanted to teach Deanna Troi line dancing and the "tush push" and what a push in "A Roll in the Hay" by Diane Bellomo; Captain Janeway teaches B'Elanna Torres and Seven of Nine about cooperation in "Chained Melody" by Diane Bellomo; Tom Paris helps Chakotay deal with the aftermath of torture in "Expectations" by Jennifer (Siubhan) Pelland and, in "Second Star" by Wolfrunner; B'Elanna Torres finds a reason to believe in a place called "Neverland." Poetry by Liz Gray."

Beyond the Final Frontier 3-L is the All Ladies Edition. It contains 86 pages. Color cover and graphics by R.R. Schmitt.

From the publisher: "Features: "A Roll in the Hay" (Troi/Crusher) and "Chained Melody" (Seven/Torres) by Diane Bellomo; "Second Star" (Torres/original Klingon woman) by Wolfrunner; and "Kathryn's Dilemma" (Janeway and original alien) by Sandy Weiss."