Bedtime Stories is a slash anthology of fiction by Lady Ra. Each issue focuses on a different fandom.

Lady Ra says: "My Mission: To entertain you with naughtiness. But naughtiness with a lot of love, loyalty, courage, and humor thrown in to make it even better. So, if you're looking for dark, angsty fic with death and dying and partner betrayal and infidelity and sick and twisted endings that make you want to slit your wrists, you ain't gonna find it here. All is sweetness and light in my universe. Angst? Yes. Owies? Yes. Bad guys? Yes. Sex? You betcha. But: ALL MY STORIES HAVE HAPPY ENDINGS. ALL OF THEM. WITH SMOOCHIES ON TOP." 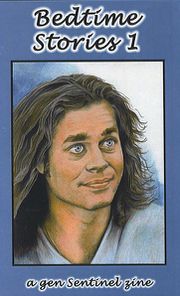 Bedtime Stories 1 is a Sentinel slash 173-page zine published in 2006. It may have cover artwork by Kate Nuernberg and interior art by Lilac.

Summary from Agent With Style: "Wherein Jim eavesdrops on an officer threatening Blair in the police headquarters stairwell and prepares to ride to the rescue, only to realize that Blair is fully capable of taking care of himself, and that his best weapons are his mile-a-minute mouth and his anything-goes attitude about sex. And what if Blair met Alex first, so when he does meet Jim, he doesn't exactly think Sentinels are the best thing since sliced bread?"

See reactions and reviews for Epiphany in a Stairwell. 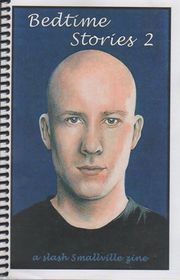 Bedtime Stories 2 is a 167-page Smallville slash zine published in 2006. 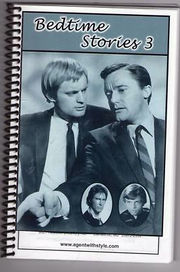 Bedtime Stories 3 is a Man from UNCLE slash zine. It was published in 2006 and contains 165 pages.

See reactions and reviews for The Disturbance in the Force Affair.

[The FAO Schwartz Affair]: The set-up is why Napoleon chose Illya as his partner. The story is told in the first person from Napoleon's pov to a rapt audience of one, his lover, Illya, from the comfort of their bed. I'm not normally big on stories told in the first person but RAC manages to perfectly catch Napoleon's character and way of speaking. The story itself is sweet without being saccharine. Or maybe that's bittersweet when you realize all it is Napoleon gave that day, so much more than just his partnership. And then there's just the right amount of tartness from Illya to spice things up. I hear there's a sequel in the works; I sure hope so. [1]

[The Better Gadget Affair]: This is an alternate (and more recent) look at the nascence of Napoleon and Illya’s relationship. Personally, I love the idea that the boys were friends (and more!) before they were partnered, especially since certain (Illya-lite) episodes in the first season seem almost to necessitate this interpretation. This story takes us back to the very early days, when Solo was solo and Illya worked exclusively in Research and Development (or so it would appear). With the help of some new-and-improved gadgets and a shared enemy, Napoleon and Illya develop a great repartee and then a close friendship. Both of the characterizations are strong, though I have a special fondness for this nerdy!Illya (he’s almost Q-like (Bond, not ST) in his gadget-enthusiasm, which is most amusing), who, as Napoleon finds, is so much more than a simple scientist. The dialogue made me laugh out loud at times, but the story is also sweet, suspenseful, action-packed, and includes really hot first time sex! Plus, there’s a very subtle innocence that hangs over both guys in the story which I found appealing; you get the idea that a lot of their strength comes from their relationship, and they have to be together before they can follow realize their true potential. [2]