Beauties and the Beast

Beauties and the Beast was a purposefully confrontational essay by Anonymous that was printed in The Captain's Log #26. 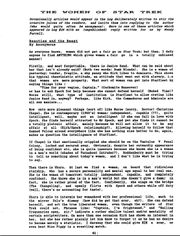 It was printed to encourage fans to write LoCs to the newsletter.

As everyone knows, women did not get a fair go on Star Trek; but then, I defy anyone to find ANYTHING which gives women a fair go in a totally unbiased manner!

Firstly, and most forgettable, there is Janice Rand. What can be said about her that isn't already said? (Both two words: Dumb Blonde). She is a woman of yesterday; tender, fragile, a shy pansy who Kirk likes to dominate. This shows his typical chauvinistic attitude, an attitude that went out with slavery, i.e that women are sere property. What sort of woman can get into Starfleet by saying things like: "Time for your vegies. Captain." (Corbomite Maneuver) or has to ask Spock for help because she cannot defend herself (Naked Time)? Worse still, what type of institution is Starfleet to allow cretins like Janice Rand in, anyway? Perhaps, like Kirk, the Commodores and Admirals are all sex maniacs... Now onto more pleasant things (sort of) like Nurse (sorry. Doctor) Christine Chapel. She is contemporary (1960's) woman: independent, capable (??), quite intelligent, well, maybe not so intelligent if she can fall in love with Spock. She finds herself attracted to Hr Spock, and yet she finds it cannot be a totally platonic affair, mainly because he will not allow it to be any affair at all (Kirk/Spock relationship?). Allowing herself to follow that damned Vulcan around everywhere like she has nothing else better to do, again, makes us question the intelligence of Starfleet. If Chapel is that emotionally crippled she should be on the Tantalus V Penal Colony, locked and secured away. Obviously, despite her outwardly appearance of being confident etc, she is quite insecure because she knows she is a woman in a man's world (shades of Turnabout Intruder?). Roddenberry must be trying to tell us something about today's women, and I don't like what he is trying to say. Then there is Uhura. At last we find a woman, on board that ridiculous starship, who has a secure personality and mental age equal to her real one. She is the woman of tomorrow: totally independent, capable, and completely confident. She knows she is in a man's world but she doesn't give a damn; in fact, she is rather proud of the fact. Confidently, she sings on the bridge (The Changeling), and openly flirts with Spock and others while off duty (well, there's no accounting for taste).

Uhura is able to intermix her womanhood with her professional life, much to the mirror Sulu's dismay (how did he get that scar, eh?). She can defend herself, and act the true liberated woman, even though the writers of Star Trek could not. Phrases like: "Captain, I'm frightened." and "Hailing frequencies open, sir." indicate a rather shallow talent and/or mentality of certain scriptwriters. On more than one occasion Kirk has shown an interest in her, but she has rather plainly let him know to forget it as he has no desire to become merely a statistic. I daresay that she could give HIM a scar, or even beat Miss Piggy in a wrestling match.

And to think we're supposed to be fans of Star Trek. Think again! Seriously though, it's befallen me, as a go-ahead type woman of the eighties to write a sequel to this article. Do you know, it's really quite unfair to disagree with someone who may not be around to defend themselves, but, bloody hell!, is Anon a bra burner or what?? Now as much as I agree that women never did really get a fair go on S.T. I don't think that the women themselves gave a poor show.

The first to spring to mind is Janice Rand. Yeoman Rand, a whimp? Never! Not the feisty Janice. And Blonde, certainly. But dumb? For the ten or so shows that she was in, Janice Rand proved to be one of the most dynamic female crew members to be seen on classic Trek. One of the things I liked about her was the way she joked with Sulu. She had a sense of humour, and could give as good as she got. But to describe her as shy and fragile and someone Kirk likes to dominate??! This is the woman who refused to back down when Kirk tried to convince her that he hadn't attacked her in the ENEMY WITHIN, and who had enough spunk to tell him he needed to lose weight. Could you be that forthright with your boss? Yet, she was still able to handle both Charlie and Miri with insight and sensitivity. Now, onto those with whom I am less than rapt. Namely, Christine Chapel. Independent? Capable? Why didn't she ever stand up to McCoy when she disagreed with him? In OPERATION ANNIHILATE, when she didn't think McCoy had given Spock sufficient treatment and told him so, he answered "Nurse! Miss Chapel! If you cannot assist me as required then call another nurse in here.", why didn't she answer back, "Suits me!" and walk out? McCoy treated her as though she had no right to an opinion and she took it! Now, I know what you're going to say... so the script writers messed up on that one. You can't separate the characters from how they are written.. They are the same thing. The writers create the characters, so it's pointless to make arguments like Anon, such as: "Uhura knew how to act the liberated woman even if the script writers could not.". If the script writers could not, then Uhura couldn't. How I wish the role of Number One had been kept, she was great. She was one of the few Star Trek women who didn't make you feel embarrassed to be female; if only audience response to her during test screenings of THE CAGE had been more favourable then maybe she'd have been kept on. (Although I can't help but wonder if that story is about as true as the one about PRAVDA complaining that there wasn't a Russian in the show. In other words, another one of Paramount's [ahem] illusions.) Onto Uhura. It's difficult to judge this lady, as you never really got to see what she was capable of (in ST:TO at least). She was good at her job, yeh, but those wimpy "I'm frightened."'s. God! (Now I don't want to slight Nichelle Nichols - there's a woman who really goes for what she wants) But, you'd have to wonder how someone who frightened so easily ever made it into Starfleet, let alone on a Starship. Probably one of the greatest things I take umbrage to is anon's implying that Gene Roddenberry is a chauvinist. The Star Trek that we saw was not purely the product of Gene Roddenberry's intentions; in fact, a lot of things made it into the finished product that he didn't agree with - mini skirts are a good example. Remember, his first draft for the show had a female First Officer, and it was never his idea to have a different "girl" featured on every show. So, do we fare any better on TNG? I think so, and it's perhaps the more subtle changes that are most important. In classic Trek, when danger struck, the men would fire the phasers while the women would fall down or try rather pathetically to hold their torn uniforms together; they played the helpless or the victim role too often. In general, they were far more of a burden in a landing party than an asset(although they were handy for hanging a tricorder on). In TNG, the women also reach for their phasers, they can look after themselves and make decisions. Even better, their decisions are used. Isn't it great to see uniforms that aren't specifically designed to show off the women's bodies? (I know, don't go throwing Deanna up at me. You know she's there to be the male lust and desire figure; just like Riker is there for us women. Personally, I think we gypped out.) Yes, the miniskirts are still with us but they're there by choice - and the men wear them, too! (Can't wait to see Worf in one!)[They're actually called "skants", Wendy, not mini-skirts. Besides, real men don't wear "skants" so you'll never see Worf in one. Adam, editor of "The Captain's Log]

If I was to criticise TNG at all in regard to their representation of women, it would he about the traditional positions that women fill; that all of the major characters are either in serving or care-giving roles. Doctor, psychologist, bar maid. Tasha could have been great as their security chief officer but the job deteriorated into the secretarial "Hailing frequencies..". Something could also be said about the fact that all the women are beautiful. In fact, in the casting guide Beverly was described as having the "natural walk of a strip tease queen"!! And why, perhaps more importantly when a woman is less than beautiful does she have to be a bitch? Kate Pulaski and the "Minder" in The Dauphin are two such examples. Finally, it is interesting how throughout the entire Star Trek saga the "powers that be" seem to have difficulty with the concept of people having a happy marriage and a career. Ever noticed how, in general, the women are called by their first names, eg Deanna, Tasha, Beverely, and Janice, and yet the men are generally referred to by their last name, eg Picard, Riker, Kirk, McCoy, and Chekov. I know this isn't always true, but it is more often than not.[1]