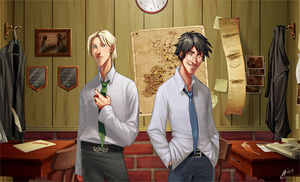 Harry and Draco Aurors by Makani

An Aurorfic is a fanfiction story in which one or more of the main characters is an Auror, a member of the Department of Magical Law Enforcement in the Harry Potter universe. The term is generally used for futurefic or AUs where characters such as Harry Potter or Draco Malfoy become Aurors, and less often for stories that feature canon Aurors such as Alastor Moody or Nymphadora Tonks.