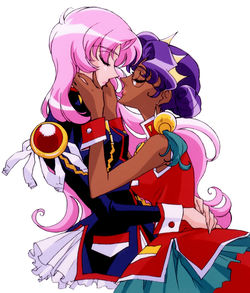 Anthy/Utena is the central relationship in the medium-crossing series Revolutionary Girl Utena. The nature of the relationship as platonic or romantic is still strongly contested in some fandom circles,[1] though in other circles, they are considered unambiguously canonically romantic.

Revolutionary Girl Utena is a 1997 anime (with manga, movie, and live-action adaptations) revolving around Utena, a popular, tomboyish school girl, and her acquaintance with Anthy through the school's duelling club and its hidden motivations. Its themes are frequently opaque and allegorical, as it serves to deconstruct classic fairy tales, and in particular the gender roles thereof. Part of the appeal of the pairing stems from the shifting roles of the two characters, which lend their relationship a certain ambiguity. Anthy acts as a gentle princess archetype with Utena as her white knight, but also has a darker hidden side which is gradually exposed, casting the relationship in a new light.

As a deconstruction, Utena and Anthy's canonical interaction uses many popular fannish tropes, such as Accidental Marriage, shared dormitory, school dances, crossdressing and others. For many fans, Utena/Anthy was their first femslash ship, or their first ship altogether.

In canon, the ship revolves around themes of self-sacrifice and fairy tale tropes, and is represented by a floral motif. Post-canon stories delve into Utena and Anthy finding each other again, as the series finale shows Anthy leaving Ohtori behind stating that she knows Utena is still out there. Such fics can range from happy reunions to angst-filled struggles; either the memories of the past are still strong and get in the way of their happiness, or Utena loses her memories altogether.