Amirin's X-Files Slash Page is a personal slash fanfiction site. It is part of Artists in Residence and hosted by Tripod.

The site is a member of the M/K Slash Ring.

4/97 - Krycek comes to Mulder with a very final request, which forces the agent to re-examine their relationship, in Tails.

A visit from Skinner leaves Mulder with a new shade of grey in an otherwise red and green world, in Colorblind. 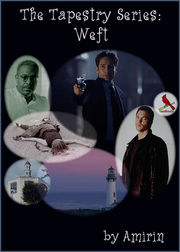 A great partnership comes to a close for Mulder in Endings.

A strange request from an even stranger source helps Mulder at a difficult time, in Beginnings.

Krycek sends Mulder off to another location, but the payoff is not what Mulder expects, in Sunrise.

Mulder enjoys a normal day and he and Krycek talk later during the Sunset. 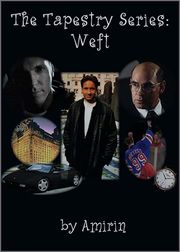 Alex brings in a new player to keep an eye on Mulder, in Greetings.

At the Rangers game, Skinner and Mulder talk about Alex and bid their Goodbyes to the Great One.

Skinner keeps an eye on Mulder and Krycek gets a few things wrong, in Confrontation.

Mulder's on his own in New York, Krycek practices Avoidance for a while.

Alex finds Fox Rocking with the frogs in Boston.

Fox gets acquainted with Alex's past, in Shaking.

Fox talks to Chae about Alex, in Rattling.

A slightly-scuffed Alex arrives on the scene, in Rolling.

The talking will have to wait until Fox and Alex are done Sleeping.

The next morning, as the guys are Waking up.

Alex and Fox deal with breakfast and razors, in Coming.

Fox and Alex go for a walk and work some things out, in Going.

Fox seeks to assure Alex of his cooperation, in whatever capacity it's required, and nakedness ensues, in Perfect.

Alex remembers back to the hockey game, and the man he spent the night with, in Practice.

New! Fox finally gets around to asking Alex some Questions.

Links to Other Artists

Return to the Artists in Residence Home Page